Eye of the Leper 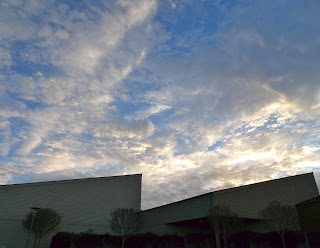 I should preface all that I'm writing today with the disclaimer that I get easily annoyed at people paying attention to their phones at the expense of others, whether this is at a dinner table, or a bar, or driving, or crossing the street, or anything else.  I wouldn't go so far as to say it is quite a pet-peeve of mine, but I find it selfish and irritating that people are willing to waste your time by inconveniencing you in this way, either by being distracted or by sending you the subtle message that you simply don't matter as much to them as the Angry Birds app, etc.  It's a similar feeling produced by people who are habitually late.  It sends a message, and the message is clear.
As I get older I recognize that lots of people look down as they're walking, even when they're not looking at the their phones.  When I was young I would often hear people telling me to "look up" when I walked.  I wasn't aware that I was doing it, but clearly I was.  I recognize that now.
So yesterday, as I was walking to get a coffee at the beginning of my day, I was crossing the "street" that surrounds the mall.  As always, I looked both ways and saw a small blue car coming from one direction, possibly a Toyota Corolla.  I had plenty of time to cross, so I did.   I cut directly across the two lanes of mall "street" towards the sidewalk on the other side.  I checked the phone that was already in my hand to see if Rachel had texted while I was in the car.  As I put my foot up, just as I hit the the curb on the other side, I noticed the car that had been coming had already made it almost to me and was coming to a somewhat abrupt stop.  Though not quite slamming on the brakes there was definitely a feeling that the car required some attention.
I glanced up and there was a woman in the car with both of her hands outstretched, palms facing emphatically upwards, giving me the, "What the hell?" gesture and look.  I returned the same to her.  She rolled her window down.
"Why don't you not look at your phone while you're crossing the street?" She inquired.
I leaned down so that we could better converse through the car window.
"Why don't you keep your hands on the wheel when you're driving?"
"You're crossing a street!"
I leaned closer to the car, stopping just short of putting my hands on the car door to steady myself.
"I've already crossed it, actually. Did you speed up, only so that you could slow down, just to tell me that in some sort of sign-language through your windshield?  That was very kind of you, but I won't be need any 'life-coach' services today.  Also, you should always keep your hands at 10 and 2.  It's a really poor driving habit to take both hands off of the wheel, especially when you're accelerating or decelerating."
She didn't like the tone of this at all.  Clearly she was not used to being talked to this way.


"Well, I shouldn't have to slow down and roll down my window to tell you all of this.  You're a grown man for christ's sake!"
"So, were you mad that you had to slow down for me?  That you were forced to comply to a law and that I didn't bow to your doing so with grateful acknowledgement?  You really should have hit me, you almost had the chance.  If you would have just sped up a little bit more you might have been able to clip me before I made it all the way to the curb.  I mean, I WAS looking at my phone, nobody would have cared, certainly nobody would have blamed you for it.  You are the victim here."
At this point I thought for sure she was going to try to make a "citizens arrest."  It would not have surprised me at all if she had a trunk filled with an arsenal of mace, handguns, field artillery, restraining devices, whips, candles, dildos, who knows.  She was clearly somebody that was used to having control over those around her.  She was trying to nag me into compliance.
Before she could mount a disciplined response to my latest suggestion, that she should have hit me, I decided to defuse the situation.  "Well, it looks like everybody survived here. There's probably no need to call the police, unless you want to file a report?"
"Oh, I am going to report you, don't worry, asshole."
"What's the penalty for crossing the street here?  I just got out of prison and wouldn't want to have to report this to my parole officer.  She's a real nasty fucking cunt.  It'd be great if we could keep this...."
I wouldn't have been able to hear her response.  She "chirped" the wheels pulling away.  It almost scared me, that a Corolla could even do that.  I was still somewhat at a distance from any type of coverage that might have been able to stop a car.  I thought she might just be pulling forward to build up speed to take me up on my offer, to run me down like a mutt.  I envisioned myself sprinting, crazed through the outdoor mall, trying to escape a demented driver that clearly had had enough, and finally decided it was time to take action.
No more waiting, no more trying, no more talking.
I didn't wait to find out.  I never wanted to discover if I was going to live or die based on my ability to sprint.  I've tried to avoid that test.  I took quick notice of any distant concrete structure that could serve as a shelter.  There was a Macy's and a Nordstrom's, both equal distances.  I walked swiftly towards Starbucks to get a morning coffee.  It did occur to me that with my shaved head and somewhat intense demeanor that I might look like a skinhead, to some.
I wondered what it felt like to be shot from a distance by a police marksmen's rifle.  I emptied my head of all other thoughts as I got my coffee, then I kept a steady pace towards the time clock.  After all, nobody likes to be late for work. 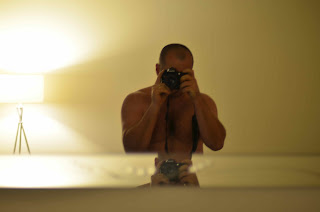