Death of a Monkee 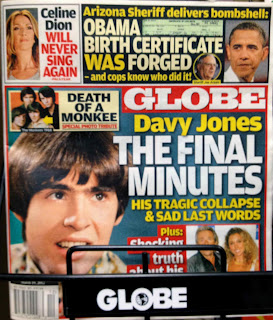 I wake up far too early most mornings.  I make the perpetual mistake of sleeping with my iPhone near the bed.  As if I don't have enough anxieties throughout the day, and that time represents no problem for me.  I keep that device always handy to supplement my stress.  I pour hour after hour into the glass screen as if it is a time machine, thrusting me ever further into the future, faster.
It's no small wonder that I have sleeping problems.  I used to keep a book near my bed so that I could read for a while, which often worked well, unless the book excited me somehow, started my mind racing.  Then later, when I would work an overnight shift and Rachel worked in the daytime I would watch foreign films so that the soundtrack could be very low and I could read the dialogue of the film with my new glasses.  Now I have this handheld portal of terror.  I lie awake reading news feeds from all over the world.  It's no way for a grown man with sleeping problems - father of one, husband to another - to live.
Rhys is starting to sleep well.  He has had several nights where he has slept 6 hours or more in a row without waking to be fed.  I almost want to give him my iPhone, just to see what effect it will have on him. I'm convinced the thing is filling the room with pure oxygen like they used to do in the heyday of Vegas hotel/casinos.  I remember watching the big MGM fire on tv and thinking, What are the odds of such a thing?

The 1980's seemed a great time for breaking news.  The early 90's weren't bad either.  The Waco barn burnings were really something.  To watch the federal government move in on people with tanks was somewhat novel at the time.  It's seeming less and less so as the years march on, and with the patriot drones buzzing overhead.
I've been thinking about unmanned drones lately.  I want one.  I mean, I realize there are probably a few community college courses I would likely need to take to really maximize its various uses.  But it sure would be great to just sit home and survey this great land of ours from the sky.  I mean, from my computer, from the sky.
Ok, enough of that talk.  It's a slippery slope, they say.  My friends sometimes seem to admonish and warn me about my various politically charged Facebook status updates, and some of what I write here also.  Who needs spy drones when you've got friends.  They treat me like I've been up all night drinking and driving on Facebook.  It's really something.  I wonder if having a "fictionalized" online persona will be a defense of the future.  I mean, if they can have a war on terror then why can't we have a defense of fiction? Absurd times call for absurd measures, like the US customary units.
Today is Rachel's birthday.  I have a mini-adventure planned.  We'll see how she feels.  The idea of driving around on St. Patty's Day in the rain, with the baby boy, might not appeal to her. But if it does... then my adventure will make me seem much cooler than I actually am, I hope.   It involves my normal pre-emptive driving while drunk regimen, augmented with some prescription drugs I found near a trash can at work.
No, not that either.
There is some hope though, they say that, "Celine Dion will never sing again" and "Arizona Sheriff delivers bombshell..."
Oh, I could hide 'neath the wings, of the bluebird as she sings....
Oh, what can it mean to a daydream believer....
.
Posted by Sean Q6 at 6:50 AM