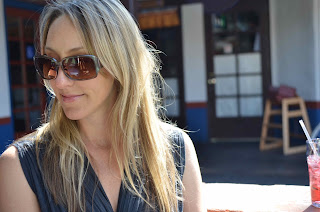 Many of my friends are at the Winter Music Conference in Miami right now.  It's a yearly event that Rachel and I used to enjoy, whether alone or together, for many years.  It's where I first met her, in the winter of 1998.  She had just turned 23 and was dating a friend at the time.  After being briefly introduced we were chatting, she was being quite animated, swinging her hands.  She swung her hand into my crotch.  It was entirely accidental and I thought nothing of it. Though later that night I told my friend, Chris Fortier, who happened to be dj'ing at the event, that I was going to "have sex" with that girl.   Though I might have used a different descriptor, the popular "f" euphemism.  That's when my friend told me that she was dating another friend, so I left it at that and didn't think too much more about it.
Years later, after we were dating off and on, the friend reminded me of the claim I had made the night Rachel and I met.  I had completely forgotten, but remembered saying it once I was reminded of it.  He was envious of the apparent ease with which I made the claim and then saw it through to completion, telling me so.  Looking back now it is funny, of course.  I was an obnoxious fool and took great pride in being so.  She doesn't remember this first encounter at all, but she vividly remembers the next one, which supports the obnoxious fool assertion.
My friends, Jon and Barry, were in a cab with Rachel, headed somewhere.  She was dating Jon.  They had flown over from Manchester where they owned and operated a label together.  I hijacked the cab with 3 or 4 girls, stuffing them all in as we were mutually headed to some event.  I began giving orders and deciding on the route that should be taken.  Rachel had to be stopped several times from telling me what she thought of me.  She was being "hushed" in the back seat without my knowledge.  I was oblivious, in the front seat with two girls sitting on my lap.  I had my own concerns to contend with and had little time or consideration for much else.  When we arrived at the event I collected the girls that I was with and walked away from the cab, leaving Rachel and her co-label owners to pay.
She hated me, she says.  She brought it up several times later in the evening, how arrogant and rude she thought that I was.   I knew nothing of this, of course, until years later, when she excitedly told me of her first memory of me.

Things changed.  She started coming to New York and hearing my dj'ing sets, she began to listen to the electronic music work that I was making.  She started another record label, Viscous, to release material that I created with Jon and Barry, which precipitated regular visits to Manchester, where we became friends.  I would lie in bed with her talking until we fell asleep, never trying to seduce or persuade her, or even get her drunk to allow the process to happen in its own slurry time, though we did frequent the local pub before retiring for the night.  She fell in love with me there in her bedroom, though I didn't know it at first.  I liked sleeping with her, and talking with her before sleep, and then again in the mornings.  Life was much less lonely with her.
Rachel decided to spend one summer in New York, to study.  I helped her find an apartment which was conveniently on the same street as I lived, though a few blocks to the west.  A comfortable walk home, a comfortable return.  By this time she had broken up with her previous boyfriend, though they still managed the label together and were very close.  One night after going out to hear a friend perform we were given a car ride home. As I was getting out I held her hand and insisted that she come with me.  She feigned resistance, not having to suspect or imagine what would happen that night, as I had already told her.  We went upstairs where I gave her a very nice bible that I had little further use for.  We talked and listened to music, then retired for the evening, changing our lives forever.
In the morning I convinced her to ditch school for the day. We ordered pizza and watched movies together. My recollection is that it was a rainy day and we had no reason to leave the apartment, but I might be romanticizing it a bit with the imaginary rain.  The day was spent as the occasional days of lovers should be, without distractions we began to fall in love.
Later, back in Manchester, the bible was among a stack of books by her bed.  Needing a title for a track we were working on I opened the book and searched for inspiration, not expecting to find any.  I opened to the red letter text of Jesus and my eyes fixed upon this verse:
Consider the ravens: They do not sow or reap, they have no storeroom or barn; yet God feeds them. And how much more valuable you are than birds! Who of you by worrying can add a single hour to his life? Since you cannot do this very little thing, why do you worry about the rest? Consider how the lilies grow. They do not labor or spin. Yet I tell you, not even Solomon in all his splendor was dressed like one of these. If that is how God clothes the grass of the field, which is here today, and tomorrow is thrown into the fire, how much more will he clothe you, O you of little faith!
Luke 12:24-28
Indeed, who of you by worrying will add a single hour...
As I finished writing this post we got the news that they've accepted our offer on the town-house we were hoping to buy.