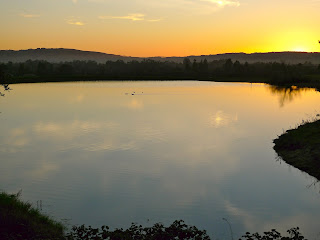 Off work last night, well after the full moon had risen.  The moonlight across San Pablo Bay in the dark was wonderful, reminding me of night flights.  The reflected light shimmering across the dark waters as it goes.  I've made the trip from New York to Buenos Aires many times, crossing the great Amazon in darkness.  Once, the flight was so delayed that we flew over in the morning light as it became day.  It was important for me to sleep but I couldn't.  The excitement, the possibility of seeing something so vast and grand and yet diminishing, was too much for me.  I had ordered several drinks already and had eaten half a Xanax bar to relax, to get the much needed rest that would make it possible for me to go two more days with neither sleep nor rest.  A common and invited occurrence at that time in my life.
Once we had crossed the northern coast of South America the dense rain forest materialized, spread in each direction, much further than the eye could follow.  There were many rivers running through the forest but the great sinuous line of river that runs mainly west to east was unmistakable.  Lucky enough to have been seated on the left side of the plane, a window seat, I sat rapt, looking out the plastic portal in a haze of fatigue and induced torpor, fascinated by what the mind experienced at such a sight, thrilled of the view that stretched towards the delta coast, and by the obscured wonders beneath it, both concealed and created by the fear and the fascination.
My thoughts flew to the early mail carriers, airborne from Miami to Buenos Aires in their night flights.  One miscalculation, especially early on in the dark flight, or some heavy weather causing loss of the site of land, and the pilot would emerge with the sunrise, far out to sea, or far inland, doomed with the clock ticking away in the drops of gasoline remaining, praying for hint of airport, or else.  Everything must go just right for the flight to succeed, with much to possibly go wrong; one miscalculation, one error, and all further correspondence is lost.  A last desperate radio transmission spreading out over miles of mute jungle. Never far from previous planes downed and devoured by the immense greenness, or the vast blue.  There in the forest and ocean float persistent thoughts of the many devils, the many gods.
.
Posted by Sean Q6 at 8:46 AM