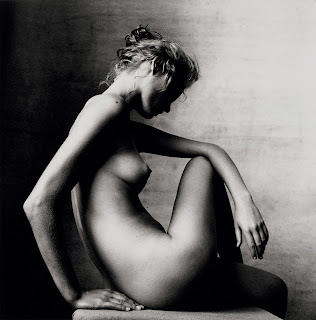 (Amber Valletta photographed by Irving Penn)
Each morning I wake up and I search for something to write about. Some days nothing comes. Other days I find a way of turning an insignificant encounter at the grocery store into a fictionalized tale.  Then other days the magical strangeness of the world is gifted to me, or sometimes upon me.
Well, in truth, I invite it, partially.
Having recently moved to California the thing that I am most astonished by is the moral vapidity of many of the people here.  They cloak themselves in all manner of new-age nonsense, their eyes smoky with inner-incense, trotting out their semi-thoughts on universal oneness and karma, the universe's ethical boomerang.  But the reality is that many of the people here are simply cheap and mean.  They mask their real selves with a lot of empty rhetoric about their celestial goodness and being "in touch."  You can usually smell it coming along with their talk of spirituality and the "sacred self."  They have the self part right.  They are one with the universe.  Just them and them alone, and the universe.
Some days, when writing, I inadvertently stumble across a rock and find one of its believers underneath. This has happened in the last few days.  I had made myself the promise to try and not read the comments page over at Selavy's site, but to just make any comments that I wanted to make, ignoring any made by the "comments coven" found daily there.  But sometimes the temptation is strong, and I am weak. So, the other day I made a comment that was meant to be funny concerning the disparity between science and belief. The joke was lost and upon re-reading it a few times I see that it came across as snarky.  The response that I got in return was an accusation of ignorance, a lack in "reading comprehension", one that I responded to more fully both there in the comments section and here on my site the last few days.
I made the counter-claim that it is the belief that rocks have magical powers to aid a traveler with a safe journey that strikes much closer to the heart of ignorance.
The commenter then wrote a written wish for my death, cloaking it in magical " " marks, to avoid being "unkind."  Certainly somebody who believes rocks have magical powers must also understand the power of a written incantation, I assumed.  But I was not going to let somebody suggest, even in jest, that I deserve to die for positing science against witchcraft, even if she did seem to have a leg up on me when it comes to the dark arts.
But the most shocking thing about the interaction for me is how quickly and easily the poor librarian cat-loving "victim" struck with full mystical venom, with personally demeaning attacks towards me, simply by asserting that the laws of thermodynamics tell us more about energy than Feng Shui ever has, and with reliable accuracy.  It was a joke, but I get it.  I stepped on somebody's toes, for a brief moment while she had stepped off of her broom.  Somebody that believes rocks carry spells does not like their toes to be trod upon. So she responded like you would imagine a librarian of the supernatural might, with nasty condescension and death invocations, even with a suggestion of censorhsip.  I responded likewise, with my version of the same, death to her ideas.  But up until today I had not attacked her as a person, I had only attacked her beliefs, and only from the viewpoint of them as being ignorant, the very initial charge that was leveled at me, by her.
I suppose there is more to the story but I'll let the occultists wrap it up into a neatly worded hex.
As for me, I am going to do better in the future, to not read any of the comments made on Selavy's site.  It serves neither of us very well.  Well, he seems to love the fawning adulation; the death of any writer, as he already well knows.  But what can one do?  He is a good writer and he deserves to be told so.  Who am I to question his adoring hordes of commentators?   I only wish that every now and then he would drop the act and respond to them in a way that I know him to be disposed to, to laugh in the face of such hokum and dimwittery, even when it comes from such a "well-meaning" source.
He once accused me of being false and pandering to my audience on my site.  I wanted to make sure that he knew this not to be true, though perhaps in this endeavor I have failed...
My readers seem to love it.
.
Posted by Sean Q6 at 8:10 AM