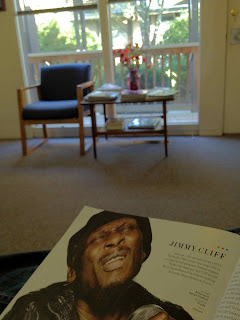 I went to the doctor's office yesterday.  It was a new doctor, for me.  I felt like it was time to get into the routine of things here.  Also, I needed a Xanax refill.
The office was a block of offices. I couldn't tell for certain if they were ever meant to be permanent. They just seemed to become an agreed upon adventure.  They were connected with wood walkways but each unit was elevated from the ground as if it was once a mobile home. You could hear the empty crawl space underneath with every booming step you took.  It had a very V.A. feel to it.
I walked into the office that had the correct number on the outside, the number that I had on the card that I held in my hand.  As soon as I opened the door I was pleasantly accosted by two dogs with a total of 7 legs between them.  One of them hopped up and down in joy that I had arrived but was incapable of doing much more.  I gave them both some petting time. Then, what sounded like it once might have been a voice admonished both of them and demanded that they return to their posts somewhere behind the counter.
I glanced to the right and there was the largest autistic adult I have ever seen standing up with what seemed to be her father. She must have been 6' 4".  It was quite exciting. They were just leaving.  I felt like I had just entered Dr. Fellini's office.
I made my way to the window and announced that I had a 10 o'clock appointment.  The source of the vibrating robo-voice made herself known. The receptionist/office administrator had had a tracheotomy at one point and used a voice translator plug which was connected to the hole in her throat by a piece of white plastic that seemed to circumnavigate her neck.  The thing about these things is that they not only transmit the intentional noises of what is trying to be a voice they also transmit a variety of arbitrary noises that emanate from the throat.  It takes a second or two to get used to. The desire to overcompensate and respond to each and every possible word runs very high.  I told myself to relax, that I would know when any of those noises were directed at me, to just trust my instincts.


Clearly, I had not prepared myself for this visit.  I snapped to attention and decided to remain on my toes from there on out. The autistic woman and her father had left so I had the waiting room to myself. I sat down and flipped through GQ magazine, reading short articles about Keith Richards and Jimmy Cliff.
After a few minutes they called my name.  I followed the woman with the plastic voice box into the back where the two dogs had free reign. There were dog beds arranged near the front receiving station and they were happily wandering in the area, pleased to see me again, one hopping up and down, one wagging its body from left to right.
I stepped on the scale... 232 lbs.  I demanded an explanation.
She offered the observation that I was fully dressed. Yes, yes, I also had incorporated that into my understanding of what was happening.  I asked precisely from what Arab trading ship did they buy this iniquitous scale.  I think she replied that it was of the standard medical type.
I announced that I would be seeking a second opinion.  But that this shouldn't affect my visit today. I was here with a clear vision of needs. This was to be a purely results-oriented endeavor. I verified with her that the weight verdict was not in metric, mumbling to myself about Europeans, malpractice, punitive damages, and this country's decline in standards.
I asked her to put an apostrophe next to it on my records.
Surprisingly, she did.
I had never before known that these things were negotiable.  I've decided to go back today and bargain my weight back down to somewhere under 220, clothes or not, that medical record will not make it through another day.

I called the doctor's office twice this morning just to see if I could get her on the phone.
No luck.