The customer is always rich 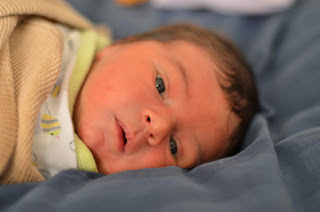 All that "they" say about having a child is true.  Sleep becomes a terrible joke.  The child wakes up, and us along with him, every hour.  I feel like I am walking through a haze of sleep deprivation all day and all night long.  Even when I do catch up and get an uninterrupted hour the feeling remains upon awakening. It is something similar to a perpetual hangover.  It's just a dull constriction in the back of the head, reminding me that the child is about to want food.
The other things "they" say are also true.  The child is wonderful and beautiful and he makes it all worth it, without even trying. The simplest expression from him washes away all of the fatigue. I find myself completely smitten with a little boy that can't even see me yet, falling over myself and everybody else to do something for him, anything.  I'm told that a child's vision doesn't develop enough to focus on my face for about 45 days or so, right about the time that he'll also begin to smile in response.
I am fast becoming quite the expert on children.  Soon I will also be offering unsolicited advice to complete strangers.  I have tried to learn to be quiet when people are offering advice and neither encourage them nor disagree, in the hopes that they will shut-up sooner rather than later, or by feeling slighted.  Interestingly many of the people telling you how to do what you are doing will also offer the observation that, "Every child is different, you just have to find what works for you."
They will then accordingly proceed to tell you what should be doing in each instance, in grand detail.
Any consistent reader of this site knows that I have little patience for such things, though I also recognize that there is much still to learn, patience being first and foremost.
On to other news... The camera place that lost my camera is now offering me a refurbished camera that is the same model as mine.  I had hoped for a new replacement as well as the newer model. So, now we are in the negotiation stage.  I don't have to accept the refurbished unit, as it could have been damaged and mine was not sent in damaged. But I suppose they could stick by their offer and make it a take-it-or-leave-it situation. We'll see.
Well, they just called as I finished that last paragraph. I told them that I was uncomfortable with a refurbished unit, not knowing the nature of the failure, whether it is a component replacement or from damage. They responded that it comes from Panasonic and it is "like new."  I asked why then does it only come with a 90 day warranty rather than the full one year.  They responded that the 90 days he had told me about was from their camera repair service, not from Panasonic...
Ha!  I win....  I responded, "Well, then I definitely don't want that.  For a company to present something as being 'like new' but not put their name behind it by offering a warranty is completely unsatisfactory."
I work for a computer company and know precisely what to say in these situations.  Negotiating with customers is an almost courtroom style of dance rhetoric, and you must seize upon any weakness of process exhibited by your counterpart.  That being said, I am an extremely compassionate technician and always fall towards the favor of the customer.  But I am also quite willing to hold my ground when the failure is not the fault of the manufacturer, or the repair attempt, but rather an error of the consumer's.  More on all of that later, one day, perhaps.  I am daily amassing quite a reservoir of content that I am not currently disposed to discuss.
One more thought on that though... The phrase, "The customer is always right" means that the marketplace will determine the terms of the market, and of the sale, not that each individual is correct in all of their wild assertions and demands.  Never forget that, folks.
Ok, life calls soon, beginning with the gentlest of cries.
.
Posted by Sean Q6 at 8:28 AM