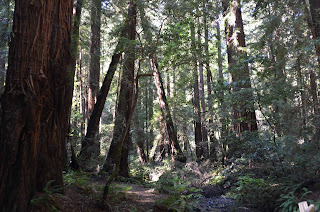 (Large Trees, leaning to be looked at)
Today we go to the redwoods, Armstrong forest.  It is up to the Russian River valley, an enchanted land, always north of here.
After our wedding Rachel and I went there for a few days. Not so much a honeymoon as just a few days to decompress before coming home and being married in NYC.  We were both new at it, like a foal and a colt trying to learn to walk.  They were awkward times and her and I are sometimes awkward people.  We have somehow managed to get up and running together.
Jesus Christ, what the fuck am I writing...  I just woke up and I can already hear Bob Seger songs playing in the background of this post.
Let me get a strong tea and I'll try again.
Ok, gimme a second and let the tea take its grip on me. It should free my mind of all that Captain Kangaroo nonsense.
We are going to the redwoods today but I assure you that it's only with the intention of developing the land for condos.
Nope.
Today we go to worship trees, big thick red ones.
No.
Ok, enough about trees.
I finally got a replacement for my little camera, the one that was lost in transit.  They lied to me about what I was getting and when the box arrived it was not quite what they had said it would be. I wrote a lengthy letter of disappointment to the CEO and the Customer Service Manager of the company, detailing my frustrations.  I don't normally ever do stuff like that but with my parents in town and a baby here I find that I am in this strange time warp where I can only accomplish one thing a day and yesterday I happened to choose that.  Everybody had taken a nap so I went a little crazy with it, the letter writing.
Since I don't have anything else to write about today I will include the letter here. In the event that any of you are interested in seeing non-political rhetoric at its intermediate level.  Also, if the recipients of the letter do a search for me I hope they come to understand that I have a voice and I intend to use it, either to be unjust or to call out injustice.  Of late that voice has been maligned as merely a debilitating sickness, a poweful imagination but precious little conscience to speak of.

You and I, dear readers, know otherwise....