A hard lesson to learn 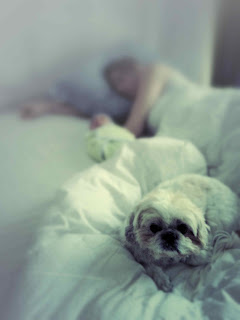 For the past several mornings, out of convenience, I've been getting breakfast at this drive-through health food place. I often get the #2... a Sausage Egg McMuffin with hash browns and a Coca-Cola instead of a coffee.  It's very close to our apartment and the morning drive is the only exercise I get all day. It's usually freezing and the car begins to warm up just as I arrive back home.  The world is sometimes perfectly arranged in this way.
You can determine how healthy a morning meal is by how many letters in its description are capitalized. Sausage Egg McMuffin with hash browns and a Coca-Cola.  In polite circles it's known as "The widow maker."
As I sat at the drive-thru window, berating myself once more, just after eagerly paying, waiting for my bag of health to arrive, I was fiddling with my morning soda, when something occurred to me.  I took the wrapper off of the straw and balled it up and then tossed it into the flower bed.  Somebody will have to clean that up, I thought.   I am a job creator.
I stayed up late last night and watched the parade of republican presidential hopefuls. Newt Gingrich seems a little bit "off," wouldn't you say?  But it sure is fascinating, educational and fun to watch this gimp shame himself in front of the nation once again.  It's a form of ethical ecstasy.  He is a veritable fountain of folly.  Lately he's been suggesting that people should get behind him because he's not really a Washington insider.  Read that last sentence again.  It's an almost Hitler level lie.  The big lie.  A lie so "colossal" that it goes by almost unnoticed, nobody bothers even questioning it.  A lie that gets to exist out of its sheer enormity alone.
Gingrich is like some demented pterodactyl of the pre-historic Reagan past. He's attached himself to the right wing of the nation's political flight and he's out there flapping and squawking away wildly, disrupting all on board, hoping to bring the whole thing down.  It's an exciting time for everybody but the air marshals seem unwilling or incapable of finally just shooting him off the wing. He's dehydrated, exhausted and has a leathery outer surface made of mostly detached foreskin meat, but with the eyes of a young Manson, still holding on for the hopes of one more round of fresh public humiliation and penis blood.
As the plane enters its initial descent into the Washington area his primeval roar is causing a scramble at Andrews Air Force base. No wonder, he once claimed that a terrorist attack is just what this country needs...   "And it's almost like they should every once in a while allow an attack through just to remind us of..." - Newt Gingrich
As the flight begins to approach the runway lights he's flap-shrieking his poisoned heart out trying to truly become our "definer of civilization."
That's presidential material if there ever has been. The nation needs to be reminded of the dangers out there, and what better way than to let the terrorists rub our noses in it with an all-out attack. That 'ought to shut us all up for a bit, especially the left.  Some hard lessons need to be taught and he's just the guy to do it.
Gingrich also thinks the best way to deal with the Supreme Court is to ignore them. I'm almost at the the point where I want to see him win.  What a wonderful way to watch an entire empire collapse.  The Grich that stole Christmas....  Nero Gingrich.  The Newtron Bomb.
Please nation, give us one last laughingstock to ride us into the coming apocalypse.
We've earned it, we deserve it, and now we should just let it happen, says Newt.
.
Posted by Sean Q6 at 8:36 AM