Do androids dream of electric sleep 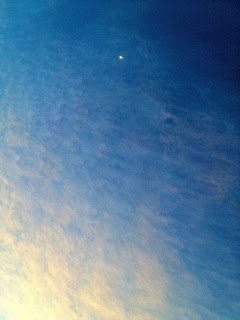 Rhys, the little guy, doesn't sleep as well as we'd like.  It is, of course, the very thing that you always hear about from parents, the loss of sleep.  But until it is happening to you it somehow isn't real, as with most things.  You convince yourself that you'll be fine, it's just part of having a baby, you'll deal with it.
Sure.
For infants all things must seem in the immediate present. We wonder what he could be dreaming about: sounds, lights, basic shapes, memories from within the womb, our voices, our faces, breast milk, breasts.  Who knows.  He hasn't established the ability to convert the random firing of neurons during sleep into story lines; the way that adults dream in the absurd sequences of pleasure or fear. It is impossible not to wonder as you watch the expressions shoot across his little face and hear the infant noises of inner activity, the miniature strains of mental movement.  He falls from wakefulness into a dream state almost immediately.  Sometimes as soon as he closes his eyes he is already in REM sleep, gurgling and cooing in his doze.
I was once gifted a book, by Z, about children's mental development and how the brain emerges from one state towards another.  It is, along with all of my other books, boxed up. I am becoming increasingly eager to unbox my life. There are things that I feel I must know now.  It's as if I've spent my entire life preparing for a moment in which I am woefully unprepared.
I was also given a book that is ostensibly to help with creating sleep patterns in children. The friend who gave it spoke of it very highly.  Unfortunately the system does not seem to be recommended until after 6 weeks or so, and does not really roll out its program effectively until around 6 months of age.  You are basically on your own during this initial time period.  No advice can help you, no system save you...
... though we are prepared to reach out to The Mormons and learn from their vast historic wisdom.  If nothing else they will very likely be able to tell us who Rhys' mother and father are.... they are experts in genealogy, they've got it all figured out... like with Jesus' trip to America, the spirit prison, and how mere believers become gods themselves, presiding over their own universe.
Prophet Romney should do quite well here, brethren.
.
Posted by Sean Q6 at 7:45 AM