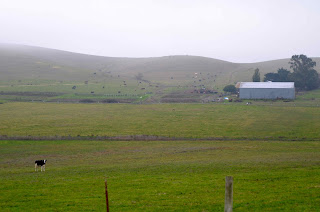 Nothing much to report from the farm. The weather has been overcast for several days but finally broke today into wonderful blueness, though it wouldn't have mattered for me.  I stayed in bed most of the day, sleeping.
I have been fighting off the superstitious and ignorant, again. This time I was defending myself from stones, magic ones....  I will never understand it.  The more ancient an idiocy is the more people clamor to it with an air of adopted reverence. In their efforts to reject the traditional religions of their own culture and to hopefully generate some inner interest both for and in themselves they cling to any system of the past, no matter how absurd. Christianity doesn't suit the needs of these old souls, you see.
Feng Shui.
These nearly pre-historic occult diviners had it all figured out, long before all latecomers.  They just didn't share this celestial and spiritual knowledge with their slaves.  They didn't want to exaggerate their findings, you see....  Now we are stuck with those who cling to the empty language and echoed methodology of this foregone hokum, enthusiastically discussing this scam as if it is knowledge rather than belief.  They even occasionally use those systems to critique art, seemingly oblivious to the fact that much art is made as a conscious refutation of all such mythical systems. Its current success in America is directly tied to its being made illegal in China.  Nothing quite speaks to the heart of the American believer the way that a foreign ban does.
But these are just generalizations, by one atheist who perhaps lacks the needed reading comprehension to plumb the depths of this ancient arcane wisdom.  Who knows, one day soon maybe I'll go into more detail on the matter, if the celestial sands suggest it to be so.... For now I wouldn't want to further disrupt my Chai Tea.
Today is a lazy day and I want to go lie down and read. I made the mistake of just going to the grocery store while hungry.  I came home with close to four times the amount I had set out to buy.  I have begun a new diet, one that has worked well for me in the past.  It sounds easy but that is only a deception.  If you were to try it you would find that it is nearly impossible to stick to and not annoy everybody around you, especially if you try eating out at a restaurant with them.
The diet is this: consume no fried foods, no dairy products, no soda.
That's it.  I can eat anything else that I want.
Fried food and sodas are quite easy to cut out from your diet.  Though I am strict about it, nothing even sautéed in a pan, even with oil.  Though that is not strictly frying it is too close for me and I remove it from my diet.  Food can be cooked with oil, however.  Right now I'm making brussels sprouts, baked with oil, grilled chicken.
It is cutting out dairy products that is genuinely difficult.  Regardless of what any waiter or waitress will tell you butter is applied to almost every single food you eat in a restaurant, even many of the restaurants that claim to be of the "health food" type, unless they are vegan, of course.  By removing dairy products from my diet I practically become a vegan, except for the pork, beef, lamb, chicken, fish and sausage that I daily consume.
Beyond that I am one with them and their movement.
To prove it: I have been meditating with my cleansing crystals all day long, it's really channeled my dragons.
.
Posted by Sean Q6 at 8:40 PM