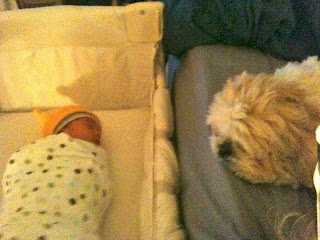 (iPhoto by Mother Earth)
Barkley is adjusting.  He is quite taken and fascinated by the new creature and seems to sense the sea changing underfoot.  He is riding the undertow tempest of his quick breaking heart.  He sniffs near the baby, and then where the baby recently was.  His ears prick when the baby cries out.  He will barely approach the actual swaddle, even with much mixed curiosity and encouragement.  He can't seem to quite figure out what it is yet, though he senses its importance.
I feel a little sad for the pup.  He's been given deep affection by us, and in the primary position as such, for his entire life now.  He's having a difficult time figuring out where he fits into the new scheme.

I've tried to explain to him, using my most compassionate terms, that the totem pole has merely gotten one notch higher. He should be very proud, though his position remains the same.  It is not a demotion, it's simply that the company has expanded, which gives him more job security, not less. We're entering new markets and this is an opportunity for him to really prove himself, that management is genuinely behind him on this .  He is, and always has been, a valued asset to this office, an integral part of our ground-force strategy.  He will keep his current offi-cubicle and pay-grade, we might even provide him with a new secretary, a blonde!
Ok, talking about the dog as if he has a job here is making me ill.  It was the last sentence that made me get really woozy, the blonde dog-secretary.  The dog is fine, he watches too much Mad Men, perhaps.  He has been scratching for the new season.  Is "secretary" a pejorative term that we're not supposed to use any more, like "Oriental" when used to describe an individual?

Napoleon had many secretaries, as did Mary Queen of Scots and Catherine the Great.  The orient has not disappeared, it simply doesn't represent persons anymore. At least not in polite and respectful northern conversation.  It is still a place, somewhere in the mystery of Asia, right?

Were words always this evil, or was it just the nouns all along?
Nouns are just nuns with a generous "o" slipped in.


In honesty, the fuzzy fellow is already beginning to sense that I am a trusted ally now, something I've been forcing on him all along... bribing him with playfulness and in-flight pink-bunnies that he enthusiastically chases down the hallway, only to waggingly return to his loving tormenter.

Now he finally gets it.  We're buddies, compadres. We're in this together.  We're not racists, just because we used to say "Orient."  We're not even speciesists, even if he is a dog, of noble Chinese heritage.

That's the message we'll bring to the new one, too.  We're all mandarin around here.


My readership has doubled in the last two days.  It can't last.  I'll find some way of accidentally seeing to it. I won't even be sure what caused the drop-off, the unseen loss.

I'll assume it was the use of the word oriental, not even as a noun, but only as an adjective.

I'll blame it on the occident.