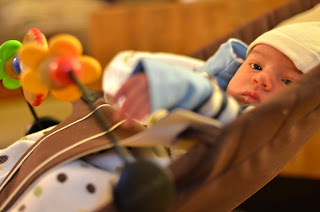 Nothing to report. Days pass with increasing speed.  I've been given some time off for having a baby, several weeks.  I had big plans for that time, things that I would accomplish that would help shape our future.  Nope.  Instead I take more naps, stare vacantly at the computer screen, watch Rachel feed the baby and change his diapers, go for walks, etc.  I should really stop complaining and accept that I was destined to be right where I am now... no further, just father.

Don't get me wrong, I love the free time to be around Rachel and the boy, it's a truly adorable time.  I'm helping in small ways, almost imperceptible minor acts that accumulate over the course of the day, I hope.  But it is very easy to feel useless, a bumbling nuisance, a non-essential in a world of essentials.  Other than holding the baby I haven't really been able to learn how to do much to help yet.  Rachel has leapt quite naturally into the process with a zeal that is inspiring.  There is no way to match her energy for it.


My socialist friend from Holland has written me a funny email with some good advice.  He recently became a father also so he has just over a 1 year head-start on the process.  He is often filled with both wild and grounded advice, some of it is good and funny, some of it useful, some of it the other kind.  He is sensibly questionable of other fathers and the claims they too often make.  We agree that it is that sort of thing that has so skewed many people's perceptions of the process and perhaps even kept some men from committing to the act themselves.  People speak in hyperbole about it all, which tends to frighten and intimidate. The act seems too large to perform, the risk of failure too great. Because they often lack imagination they speak in terms that merely suggest completeness, beyond the reality of it all.

They wouldn't actually do "anything" for their child.  It's an absurd fantasy scenario where they get to claim they are heroes without ever having to prove it. It's a way of claiming that they magically became a super-hero-god just by having and loving their offspring.  If I ever utter those words on this site then please remind me.  Please... people that make absurdly untestable claims about the love they have for their children should be ostracized.

Even Meatloaf had the good sense to qualify his commitment to love. If I ever hear somebody claim that they would "do anything for their child" again then know in your hearts, dear readers, that I will be chanting this song in my mind for them when they say it, and I will forever equate their emotional world with the Mediaeval world of Meatloaf.

No stranger to hyperbole myself, I often find the impulse to overstate little events.  I prefer to think of it as poetic license, but when I go back and read some of it while I am sober I console myself with the idea that perhaps my readers will just think of me as romantic, rather than just dull and maudlin.  Who knows.  There's always another day to write in other ways.  Two out of three 'aint bad, says Meatloaf, the bologna bard.

Ok... dear god, please help me out of this casserole.

Many of the fathers that I know became a parent through a drunken lack of planning.  It all began as a fun naked accident.  Some of them accepted the fate of it, some of them resisted, some of them decided they liked it so much that they had a few more kids, with or without the original mother.  For Rachel and I it was quite different. We decided we wanted to have children so we structured our lives so that we could do so.  A fact that has given me much less room to complain.  I mean... I do complain sometimes, but it carries less weight, much less.  I don't get to laugh about the "Ooops" and the "Oh well" moment, though I don't imagine that I'm missing all that much.

I get to compensate by saying "Oops" about very different things now, like a diaper with a dollop of mustard-pooh in it.

Or, getting caught listening to Meatloaf.