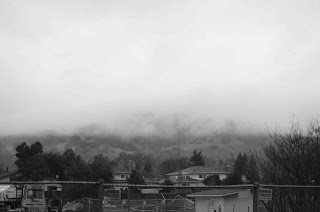 I'm not sleeping well.  Too many dreams.  Last night I dreamt that I was holding a paperback book on anthropology, one that I read when I was younger. The binding had dried and the pages were falling out.  I was being very careful, pulling each page out and then replacing it where it had been so as to keep the continuity of the book intact.  I was telling myself that it was still readable, that I would be careful with it, take more time, but that it would be okay, nothing was truly lost.
I awoke wondering how long it would be before many of my books were in that condition and I was having to read or re-read them that way, the price of books skyrocketing in this advanced new digital age.  It made me feel old, too old, to feel that way, to have those dreams. To worry about the future, my future, our future, to worry about an age of disintegrating books.
A few days before, at work, a group of people were standing around comparing their driver's license photos, all unanimously agreeing how bad their pictures were.  I showed mine.  Everybody smiled at it and handed it back.  I realized long ago that as you get older you come to terms with the fact that you actually do look like the picture on your license. Your self-image taking perpetual knocks after a certain age. But that can be funny in its own way also, aging need not be all misery, yet.  You become the very thing that you used to show your friends, the image to laugh about.  Or, you keep it hidden and it most decidedly becomes something that will not be laughed about, ever.  Either way, with a grimace or a smile, you lose.
You are finally getting old when you concede that the photo on your license does actually look like you. When you can look at it and recognize the grim truth there. It happens around 40, for most, I would think.
I just did a search to see if Kant's "Critique of Pure Reason" was available through the iTunes store. It was.  The selection that is presented most forcefully, in advance of all others, seems to be an audio version of it.  Then further down the page it looks as if the actual text survives, as binary artifact.
I suppose if the iTunes servers hold and the power grid keeps churning out endless megawatts for us all then it needn't be such a terrifying apocalypse after all.
I read McCarthy's "The Road," his worst book to date, but the one that most of my friends have read, or would like to, if they ever find the time.  After "No Country For Old Men" I lost interest in him, thinking that he couldn't get much worse.  But my interest was briefly renewed, and I was proven wrong, when a friend kept asking me about a book that everybody had read called "The Road."  When I found out it was McCarthy I felt obliged, excited, then disappointed.  It's his "Old Man and the Sea."  The book is a parody of his style and hardly rises above a parable in tone, with its visions of doomed fire & asphalt.
Its last-minute-Christ-in-reverse-message-of-hope at the end is unreadable, if you have ever loved his previous works, that is.  Its, "I'll be there with you always in your imagination, you're one of the good guys..." swill is too much for me.  Though, to be fair, he did write it for his son, and the millions of dollars generated by it should keep the progeny from terrifying darkness for a few seconds longer than the rest of us.
It's too bad that it seems to be the book that will be read, the one that McCarthy will be remembered by, somewhat.  I will have to talk about it with people in the future.  Who knows, when my copy is falling apart one day then maybe I will treasure it much more.  Perhaps I will cling to it, keep it hidden in my coat, and read it as both a visionary message of prophecy and hope, one for the good guys.
.
Posted by Sean Q6 at 8:38 AM