To Kill a Hummingbird 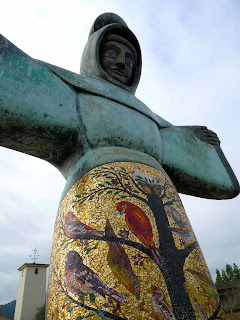 So, to the enchanted forest we went.  The day was warm and nice but within the forest it was damp and cold, we did not stay as long as I had hoped, though long enough to see some impressive redwoods and to appease the forest nymphs.  This was not enough to keep the baby from crying but it was long enough to enjoy the sense of the forest, cold as it was.
Selavy, Cafe has warned me that he will rebuff me soon with tales of mysterious geologic processes, that he must, it is his duty.  I invite this, of course, as I greatly prefer arguing with him to all others, but am always open for a UFC cage match with a Wiccan.  We will soon see who is the astrologer.  I have no idea why he would invite such a thing after all of the shame he has brought upon himself thus far with his conception of lunar cycles and time zones, but so be it.  He is on a rocky mountain high and it brings him pleasure to stand up for the faithful and superstitious, in his own way.  I suppose he is stuck between a gem and a jewel.
But as a pre-emptive assertion... There are processes that are marvelous and as yet unexplained.  I merely maintain that we are not able to influence the course of exterior natural processes through totemic ritual or faith.  I did make clear that faith has measurable benefits to the believer, as in the healing process, and that general health is improved markedly by faith in wellness, through whatever means practiced.  The mind is a powerful organ, one that affects itself and is likewise greatly affected by messages from the body.  But the concept that the believer is able to divert the physical world through distant will has proven itself to be false time after time.  Again, carrying amethyst and moonstone with you does not cast a spell over you assisting with safety in travel.  That is witchcraft and as such deserves to be ridiculed.  Marvel is not magic, be warned CafeLatte.... Christian Rock is the one and only true rock power.
Enough for now. I will await Selavy's fan base concessions and respond in full at that time.  Then we will sit in a pleasant circle sipping tea and nibbling biscuits, praising his erudition and warmth, CafeScience. When he's done we will praise each other's writing as being inspired and in tune with the celestial muse, Orpheus, Morpheus, Amethyst and all.
In other news...
I am beginning to fall back in love with the little camera that was sent to me.  I don't regret writing the letter that I posted yesterday, as I was wronged by the repair company, but I'm starting to feel that I should be simply thankful I have the camera back and that it works well.  It was all that I truly wanted, though the extra battery would have been nice, etc.  Below is a picture taken with the refurbished unit.
In even other news:
I read this from a recent news feed:  "A man was found on fire in woods near his home. The police are treating the incident as suspicious."
When reading news feeds I am struck with the condensing genius of the world.   There are so many feeds I see that are worthy of The Onion, just as they are. Much like text messages the abbreviated world of news feeds suggest much more than they could possibly intend. The inadvertent meanings are the best poetry there is.  Soon machines will not only write our poetry for us, they will also explain it to us, in ever diminishing comical terms.
Ok, here's the promised pic from the refurb-camera.  I imagine my readers will soon tire of the baby pictures. I think they are simply magical.... 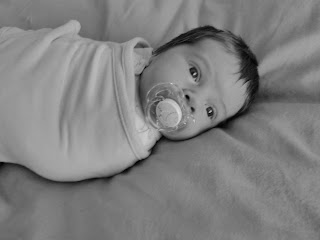