Trampoline is a funny word 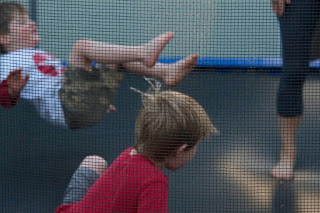 There was a trampoline, which the kids greatly enjoyed. We made lovely little pizzas.

I recently dipped near an immediate goal, which was to return to the weight that I was when I felt only mildly overweight. That was ten pounds ago, sometime around Burning Man, likely just after. At the very least I'd like to get below that weight.

Ideally, I'd like to get below 200 pounds again. That does not seem unreasonable, merely ungraspable. I am not one of those jolly fat fellows, like Santa. I am quite pissed off about it, sweaty and fat with bulging eyes, bursting blood vessels, all of it, etc. I tend to take all of that misdirected anger out on trampolines. I nearly broke the contraption with my unrestrained joy at it.

- Can this thing bear my weight?

- How high do you think I can jump?

- I feel so free when I am floating.

- I wonder if they sell these at Walmart.

And on and on until I tired of what was starting to quickly seem like exercise. It must have lasted almost seven minutes.

For some buried reason, the images of the boys jumping around inside the device reminded me of the Talking Heads, mostly the one at the top. I was going to write a piece based around the existential ideas of suspension and paralysis. Not the physical form of it, which I have been warned about by my radiologist friend, a man that would know.

But instead, the more insidious forms of it. The state we find ourselves in: unable to fly, afraid to fall, laughing nervously along. Performing tasks as rote, just to get by, to call life "life."  We see it in the broken and disconnected frames, snatched perhaps from time, yet added to the budding self-consciousness, where the weight of experience settles into its future form, for good or ill. 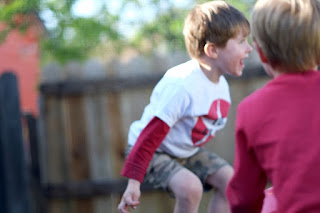