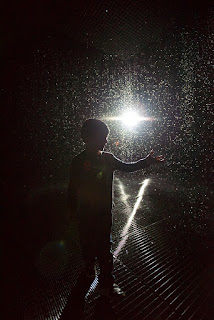 We did get caught in the rain in LA. They have cavernous dark rooms dedicated to the stuff. The kids loved it. I was less mystified with the experience, having figured out how the effect was accomplished, and was far more interested in capturing some pictures of them playing, which they did. They could defeat the effect of it by running around, which they also did, but if one walked through the exhibit slowly the rain would cease to fall where you stood, mostly.

It was almost as if a film set or a photo-shoot site was created nearly for us alone. It's hard to tell from these pictures but there are about 25 people in the room also. I did the best I could to position myself and hope for magic. I did not have to ask the kids to pose or to position themselves at all. That approach rarely works, at least for me. Some have a talent for it.

I stood on one end of the exhibit as they were being kids; dancing, posing, and playing in the make-believe precipitation, positioned against the only light in the known universe, for the very briefest of instances.

The sound of laughter filling the galaxies. 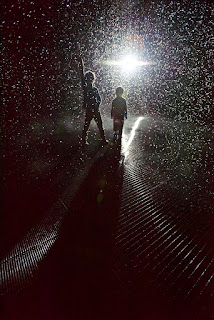 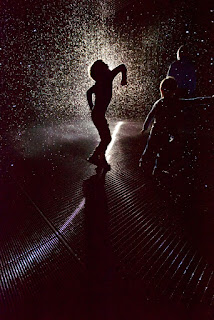