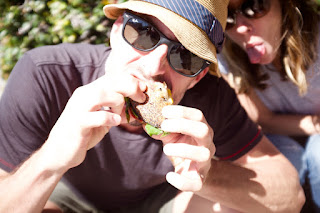 Trump fans are really coming out against the decades-long indignities they've suffered at the excesses of liberal decency. I mean, these hard working people have had to suffer political correctness, the near equivalent of social internment camps. And these are white people... I mean, the real white people. Cowboy hats, and stuff.

The juggernaut of ugliness that is the Tea Party has finally gained the momentum that they had all hoped for. They just didn't get the candidate that they might have wanted, or maybe they did. Who knows, group intellectuals can be such a mysterious bunch.

I'm relieved that I won't have to see much more of it, thirty years if I'm lucky. I do worry about the boy and the nation that he will move to, but that's just natural. Parents fear the future more than most.

I think we don't have much choice but to let Trump and his ilk-storm fashion the nation out of their abbreviated ideals. It does not appear that there is any stopping him now. The popular backlash against the two Obama victories will soon be complete.

It would be easy to blame Sarah Palin for all of this. Or, more accurately that useless goblin wart John McCain, but this is all just part of the democratic process. When the best that both sides have to offer is Trump and Clinton/Sanders then we'll get the president that we deserve.

I like Sanders. He is fun to watch and I would find life more interesting if he were to become the president, but it doesn't seem that the Dems have a chance against Trumpzilla. Americans won't vote to stop anything - take careful note of Congress - they only vote when they have a good reason to believe in a candidate, which is what is happening with Trump. It feels like being in a nationwide prison shower scene. Somebody is about to get fucking raped and the entire left is a legion of limping impotents, while the right are lining up en masse to gang the living shit out of something.

It's as if the Bundy clan are the only registered voters left, and they're all about to lose that privilege. Yet another constitutional battle on the horizon.

I'd like to see Obama pull a Giuliani and try to extend the term limits to three at the very last minute, declare a national emergency. I'd prefer to see Obama face off against Trump in a debate and an election more than just about anybody else, and I wouldn't consider myself an enormous fan of him. But he has become as comfortable with his power as Donald Duck has become with his Uncle Scrooge's money. Which is why I'd really like to see Bloomberg run as an independent. I think he made his own money, and quite a bit more of it than did Trump.

If I had the resources I would shoot a film with Trump emerging from the waters of the Hudson, ala'-Zilla, screeching and breathing flaming orange hair from his nostrils. Little hands at the end of little T-Rex arms, etc., but a massive green lizard cock, of course. Maybe invert it, make his tail emerge from the frontside of the abhorrent beast, an enormous thagomizer where the penis head should be.

Pan down. A slow-motion shot of it rising out of the water with the Manhattan skyline in the rear.