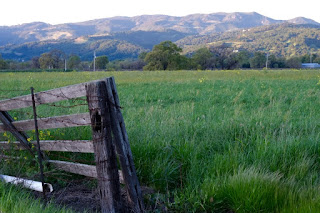 It is settling in: my glasses are gone. If the blind lead the squinting…

I double-checked the gym, re-searched the apartment, howled to the clouds, then swayed begging towards the waning moon. It makes no sense. I rarely ever lose things. Like with most stuff - not things in which one can reasonably presume that they were left in a specific spot and now the thing has been unsurprisingly taken from there - there is only a haze of mystery surrounding a brief window of time, a reminder that there is a final end to all certainty. There still exists a vague sense that I had them then, I think, but then I noticed here that they were gone, with nothing substantial in the interim to give me hope.

While they are only glasses, they are personal. They are connected to me. They were. There is a mild horror associated with loss of that kind. Impermanence seems permanent enough, as is. I could take the Zen path and express my non-attachment to them, but they still need to be replaced, so that is less of an option that is available to me. Non-attachment is not the opposite of gravity.

Ah well, I still have cameras to buy, expensive ones. I've not only lost my mind, I've doubled down on an all-or-nothing bet. I'm going to buy the newest, most expensive model. It is more than three times the cost of the one I purchased that I should not have. With some basic multiplication it all comes out even and the world is good. It'll end in zeroes. I'm certain of it.

I'm a single guy. I get to spend money on whatever I want, though I know I shouldn't. Not like this, anyway.

I did something uncharacteristic of me, yesterday: walked around Sonoma with the intention of taking portraits of people. I failed at gathering any portraits, but it was nice just to walk around my realm with the intention of taking pictures. Framing the world does something for it. It changes it in such a way that one starts to see the genesis of composition in all shapes, the shape that precedes.

I read a book a decade or so ago, The Sacred And The Profane. It argued for an outline of differences between sacred space and time and secular space and time. It explained how, and why, a religious person walks through life in a very different continuum than does a secular-minded person. The author dispassionately explored the meaning of the religious and irreligiousness experience in such a way that it rendered refutation less necessary, useless even.

Wandering, looking at the world with an eye to capture or convert, does a similar thing. I think. To create art is to echo the trinity, in a sense. The initial impulse, the idea, has its corollary in God, the idea behind the machine. Then, there is the act of creation, where the artist becomes physically involved for a brief time with their creation, to mold it into its essential form. This has its reflection in Jesus, where the idea transitioned to become a physical part of mankind, the realm of the touched.

Then, once the physical work is complete it becomes a thing all of its own, a creation of spirit, not at all dissimilar from the Holy Spirit, the knowing wind. More aura than is ratio cogitari or hominis, genus.