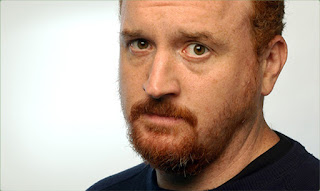 Louis CK has confused himself with Eugene O'Neill.

I saw CK in the film Trumbo and he was abysmalo. Dumbo. He nearly ruined the film, not just for me but for our entire group. He can and does have dramatic moments in his comedy routines, particularly his show Louie, but he seems to have convinced himself that he's a serious actor now, that he has something to vital and deep to convey. He doesn't, as an actor. Not to say that the new show, Horace and Pete, isn't any good, just that Louis CK needs to stop being in it. The writing was good enough, but he can't carry a moment, while the other actors can, and did; Alan Alda, Steve Buscemi, Jessica Lange (as Faye Dunaway), Steven Wright (as Hank Chinaski), Edie Falco, and more!

CK is smart enough to have Steven Wright play a role that suits him, but he fails to do so with himself, unless the premise of the series is those that are out of place when being watched being out of place. You can feel his "pause-headturn-pause-look-back-at-other-actor-look-away-again" moments arriving minutes before they happen. It's an actor's showcase: paucity of surprise, loss of believability, reliance on vulnerability as a characteristic, listening to the other actors too intently. The last of these is usually a good thing in an actor, when done well, but you can tell that Louis is thinking about it too much. He never presented himself as being natural, but his awkwardness needs less work. He does with his intense glumness what Jim Carrey does with his face, or tries to.

I stayed up late (for me, midnight) and binge-watched two episodes of the new show. I slept in until 5am or so. In fairness, I only really watched the first episode. I was starting to drift off in the second. Louis might improve a bit as the series progresses. First episodes are what they are. It was nice to see Alan Alda scream at Louis. That's almost how I felt.