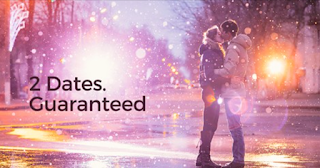 This odd numerical promise from a dating site has me questioning whether a single date between two participants qualifies as 2 Dates, as there are two people involved.

2, it can be used as a divisor to determine an integers evenness, or also a slang for the act of defecation, though not usually both in tandem. Two individuals might very well go #1 together, but they must meet to make nice, and a big number two.

I also question the grammar and punctuation on the first statement, then their lack of same on the next. The site is called Tawkify. (Pronounced: Talk-If-Elfy).

2 Dates. (Period)
Guaranteed (More of an essence than a promise)


Nice to know that somebody loves me.

No need to talk it out, we know what it's all about.

Yes, that is their actual name, Tawkify, and they have been self-described as "The antidote to online dating," perhaps not quite realizing that the word antidote contains more than a single meaning, as it also describes its metaphorical and sometimes literal opposite, and can be read humorously if so desired, etc., for either of its intended or implied meanings, or otherwise.

If you do not wish to dote, then just try antidote.

Dating is an unpleasant situation that needs to be counteracted by an online antidote, yet they are seemingly promising to double or counteract its curse: Get it all over with in one night, two people, Guaranteed (no periods)

Who knows, perhaps it is the first dating site that has actually done the dynamic math of romantic addition and realized that punctuation subtly implies menstruation, if left to linger after 28 letters or so.

As a medicine, it hardly needs to be pointed out that they do not have their license for this type of operation. I ran a who.is lookup on their domain. I know several representatives at friendly and intimate offshore pharmaceutical companies that can still effectively conduct commerce in the U.S., and I have verified that Tawkify is not among the respected organizations.

Tawkify is no friend to my medicines.

At least on this point, though, they do succeed: laughter is the beast medicinal. Its palliative effects against poison are slightly less effective than is god's love and healing powers, at least among the very best snake handlers.

I want to start a "Christian Dating Site" called "Serpent Salvation." I'll leave it up to my customers to determine if the service we provide is meant to be be salvation from a serpent, or salvation through the handling of one. I have met some women who are transformed once they hold the serpent in their hands. I wrote a hymnal called, Zipperway To Heathen. (Sung to the tune of Rainy Days and Mondays)

To say nothing at all on the meaning of the word "Date"… Does the advert above mean to indicate that these people will somehow align their calendars, or only that they will each reveal their age by the second encounter: Guaranteed.

If I owned this site I would charge a $5 registration fee and then immediately fulfill my promise by sending each of my members the two dates that they were promised.

One date would always be April 11th, 1954 and the other would be picked randomly, possibly the birthdate that they themselves provided on their registration. .

I've had regular dates with my palm and soft fingers for many months now. A date palm might be considered a Guarantee, if I don't nod off to sleep before the magic emerges.

Well, enough of my dirty dreams trotted here for the confusion and/or pleasure of others, for now. We still have unresolved business from yesterday's board meeting. I have the minutes right here in front of me.

I have cancer and every person that I know and have told is openly ignoring me. I'm going to die, and everybody around me acts as if it doesn't matter as long as I keep writing here. I'm already on oxygen and carbon-dioxide. I'm running up my credit cards like a demon. It can not possibly matter any more. Does life cease at the moment of death, or its pronouncement.

David Bowie's career as a relevant musical artist had been in a coma for nearly three decades and when he died it was as if it came as a complete surprise, when most of his fans had been steadily preparing for it ever since the release of Tonight.

Once, in the car, before the divorce, the ex-Rachel explained to me that one of the founders of one of the best dating sites in the world had devised a short series of questions that would quickly determine if you were compatible with a person or not. She, the-ex, asked me the four or five questions and, sure enough, it turns out that my ex-wife and I are perfectly compatible.


Fancy that, Flowers For Algernonymous.

Sometimes I'd like to quit, nothing ever seems to fit:


Talking to myself, and feeling old.

What I've got they used to call the blues.

Funny, that it seems that it's the only thing to do.