"… what dreams may come" 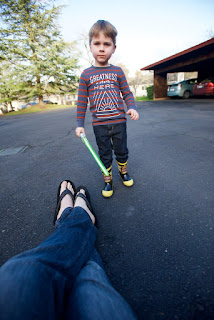 I am exhausted and have very little left to say. I am hoping to transition to a new position at work, one which will leave me with even less free time than I have now, though it will offer me greater educational opportunities. I had considered enrolling back in school to get a master's degree, but I'm not even sure that I have the energy to spare from working and being a single dad.

Other people do it, so I know that it can be done. There is simply a sacrifice of time, and an adjustment of life's point of focus. Rachel is working towards getting her master's degree, so I feel a mild obligation to do the same. I want our son to esteem education and perhaps falsely assume that he might do so through knowing that his parents are educated.

Well that, and through talking to him. I ordered him several new books of poems after the disappointment of Shel Silverstein. Poetry is perfect for children. Some of it is nearly the literary equivalent of childhood. Useless and priceless all at once - eager to be shed off, impossible to recovered as it was.

Except for that John Berryman fellow.

I have been reading again lately, that helps. I recently finished a book and started at the beginning again, reading it through twice, just to verify that I was present during the first attempt. My experiment had mixed success. At middle life the mind sleeps too easily in the daytime, even as the body remains restless through the nights, hauling the mind along with it, as if being dragged through town by a rope attached at one end to a lazy horse.

What a Man I Was

I shot off his left ear
then his right,
and then tore off his belt buckle
with hot lead,
and then
I shot off everything that counts
and when he bent over
to pick up his drawers
and his marbles
(poor critter)
I fixed it so he wouldn’t have
to straighten up
no more.

Ho Hum.
I went in for a fast snort
and one guy seemed
to be looking at me sideways,
and that’s how he died-
sideways,
lookin’ at me
and clutchin’
for his marbles.

Sight o’ blood made me kinda
hungry.
Had a ham sandwich.
Played a couple of sentimental songs …
Shot out all the lights
and strolled outside.
Didn’t seem to be no one around
So I shot my horse
(poor critter).

Then I saw the Sheerf
a standin’ at the end a’ the road
and he was shakin’
like he had the Saint Vitus dance;
it was a real sorrowful sight
so I slowed him to a quiver
with the first slug
and mercifully stiffened him
with the second.

Then I laid on my back awhile
and I shot out the stars one by one
and then
I shot out the moon
and then I walked around
and shot out every light
in town,
and pretty soon it began to get dark
real dark
the way I like it;
just can’t stand to sleep
with no light shinin’
on my face.

I laid down and dreamt
I was a little boy again
a playin’ with my toy six-shooter
and winnin’ all the marble games,
and when I woke up
my guns was gone
and I was all bound hand and foot
just like somebody
was scared a me
and they was slippin’
a noose around my ugly neck
just as if they
meant to hang me,
and some guy was pinnin’
a real pretty sign
on my shirt:
there’s a law for you
and a law for me
and a law that hangs
from the foot of a tree.

Well, pretty poetry always did
make my eyes water
and can you believe it
all the women was cryin’
and though they was moanin’
other men’s names
I just know they was cryin’
for me (poor critters)
and though I’d slept with all a them,
I’d forgotten
in all the big excitement
to tell ’em my name

and all the men looked angry
but I guess it was because the kids
was all being impolite
and a throwin’ tin cans at me,
but I told ’em not to worry
because their aim was bad anyhow
not a boy there looked like he’d turn
into a man
90% homosexuals, the lot of them,
and some guy shouted
“let’s send him to hell!”

and with a jerk I was dancin’
my last dance,
but I swung out wide
and spit in the bartender’s eye
and stared down
into Nellie Adam’s breasts,
and my mouth watered again.

For in that sleep of death, what dreams may come,
When we have shuffled off this mortal coil,