Strung Out On Lasers 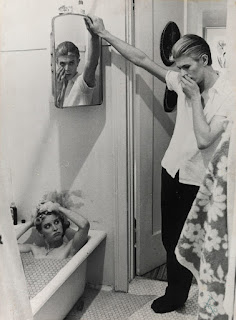 I won't bore the world with my continued thoughts on David Bowie as an artist. His legend is secure without my needing to add to the volumes of pages and fan sites. Though, do not let this fool you. You likely will not find a bigger, nor more well-informed, Bowie fan amidst your group of friends.

I will, however, relay a story about how I came to be a fan of his.

I lived in Orlando, where there was a richness of all types of southern rock that would get played on the radio stations of the time, WDIZ 100.3 and ZETA 107.7, some of which I liked then, some of which I still do. There was not very much that could be considered "alternative" on the airwaves then, though that did change marginally in the 80s as a few college radio stations started to dare playing things like The Cure and Echo and The Bunnymen, two bands that Bowie invented, along with Japan.

When I once asked for "alternative" at a record store in the early 80's the guy at the counter said, "What, like alternative to good music?" though he was half kidding and he directed me to a section where I could find Bauhaus records.

Every now and then a Bowie song would get played on the radio, and no matter the song I noticed a sort of lack of male bravado and assertion, an absence of traditional rock themes like love. Even among his early work he never wrote a convincing love song, in my opinion. But these themes of spacemen drifting off into the unknown nether, these spoke to me.

Then, there was one that really stood out among all of the rest. It was a song that seemed to speak to the other lost spaceman song. It said things that did not make much traditional sense to me at that time. The shrieking of nothing is killing me… I'm stuck with a valuable friend, "I'm happy, hope you're happy too…" There was an ambivalence, an ambiguity, and a deeply rooted ennui that gripped me and never let go.

I knew by this time that the artist's name was David Bowie as I would pay close attention and was buying all of my own records by this time. Then, there was even another song which added to the Major Tom myth. It seemed as if there was an ongoing airwave conspiracy to birth, develop, and then kill off a character. I couldn't quite determine who were the actors, who were the singers, who were the spacemen, and how could I possibly get in on the drama as soon as possible.


Around this time I wanted to be a dancer, a ballet dancer. It was a nearly pre-pubescent ambition, and one that I think back to fondly, the innocence of it. In this state of near complete absence of sexuality I was expected to somehow form some of my own, and that is precisely where it did emerge as I was entirely alone in my perpetual efforts. Ballet was a hardly announced initiative as I was already having enough struggle with my brother who claimed that my mauve shorts were pink, as if. All summer long he told me that I had pink shorts and I insisted that they were mauve, which they were. It is still a wonder that I was not gay. I mean, that people still do wonder, not that it was a miracle that I was not.

The term faggot was used openly, and was not one of endearment but rather of derision, acute derision. It was something that one knew not to be and every gay friend that I have now from that period was closeted until well after high school, at least insofar as their straight friends knew, though we all suspected, and all of us were right. Puberty made some things clearer, though not at its onset. Puberty takes time for its arrows to fly in the direction that they are meant to, and it is never as precise as one might expect up to that point. Puberty is a shocking surprise and it has informed and misinformed my senses ever since.


I went to the Altamonte Mall to buy a David Bowie album. There was a chain record store named Camelot Music, and that's where I took the money I made from mowing yards in my neighborhood. I would go there on the weekends and ride my bike home with the thing that would occupy my evenings, and weekends, and the thing that I would daydream about in school. There are few adherents to rock and roll more committed than I was at that young age, and few since. We tend to find each other in a bar or social setting as magnets let loose on a plate of iron ore.

I knew the alphabet well enough and I looked everywhere for Bowie, sensibly under both D and B, but also places where it might not make sense, like Major Tom. I scanned back and forth, but there was nothing. I walked to the counter, quite luckily out of auditory range from my brother, and asked for Bowie. They responded simply that it was in the Gay Rock section.

I make none of this up. I swear to you. I walked by the end of one of the rows of records where they had pointed and there was a section that I had never noticed before, and yes, it was Gay Rock. I walked away, fearful of what the result would be if I were to combine pink shorts, a fledgling interest in ballet, and Gay Rock.

Now, my brother was no tyrant, nor a bigot, nor anything else that I may have implied above. He was simply an older brother that one did not allow to occupy Corsica, or Carthage. A younger brother must keep all of the ammunition possible away from the one who knew best how to use it.


I didn't own many Bowie albums for many years after that, though I became more and more aware of his career through the radio. It wasn't until I was perhaps fifteen or sixteen that I finally bought, at a garage sale, one of his albums, The Man Who Sold The World. Perhaps an unfortunate first choice, as this is an album where he exhibits what might be considered his most open and explicit affections and admissions towards the act of sex with men. While I liked the album very much I was troubled by admissions of homosexuality, or at the very least, such uncertainty in matters of sexuality.

Keep in mind that my other examples of rock sexuality might have been derived from Molly Hatchet and/or Aerosmith. I partially recovered from this inculcation into manhood, though it required a substantial amount of reading, particularly French literature. Then, I emerged as a reasonably balanced adult, I'd like to think. In many ways, Bowie was the sickness and the cure.

I do not mean mine, I mean the sickness of societal bigotry and hatred as expressed by those whose music affected others with repulsion rather than attraction, and by my acceptance of his music as the inciting experience that allowed me to develop a different set of sensibilities towards those whose sexuality differed from mine. It led to my interest in lots of other different types of music, and club culture, and working for years in clubs, gay and otherwise. Though none that could be considered somehow in opposition to a particular sexuality, choice or orientation.

(Last paragraph was written by my lawyer, etc)


In short time, I collected and devoured every album he did, with particular interest in the years between 68'-80'. I ranked him amongst the artists that I considered the greatest - the Lennon/McCartney, Jagger/Richards, Page/Plant, Strummer/Jones, and Dylan, et al. It was around this time that my brother bought me the "Sound and Vision" boxset as a birthday present, a thing that I will eternally thank him for. As if his albums weren't already great enough, this guy had outtakes that deserved their own three cd collection, and much more.


I'd like to sum this post up with something meaningful, somehow. I see that I've opined here, as well as attempting to have written rhetorically and didactically, failing in one and stumbling to a crash course in the other.

My point was only to relay a story about the thwarting environment in which I became a Bowie fan. Today, one would get the idea that many others experienced similar things, though it is difficult to tell.

I'm certain there were many who endured much more, and much worse.

Some are bound to fail
Some are winter sun…