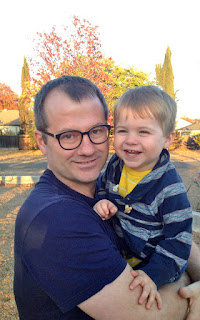 The more that I get into cooking the more my grocery bills gradually creep up into the next tax bracket. When it comes to meat, herbs, vegetables, and fruit I want to shop at one of the two fancy stores here in town. One need only look at the color of the stripped carcasses and the gross malformations of the chicken breasts at the Safeway to know that they are not things you wish to feed a child. There is something wrong with the meat there. But, at the Whole Foods and even more so the Sonoma Market the meat counter is filled with wonders and delicacies of all sorts, the remains of truly delicious and noble creatures. I wish to honor their spirit today. Specifically, a lamb or two. I'll need four hind shanks to braise, which means at least two little innocent ones will have served the UFC (upper food chain) with the ultimate sacrifice.

I'd feel less guilty about it if lambs were all just vicious little goat-like monsters, drinking their own urine and charging children at the petting zoo, but that's not the case at all. They have the misfortune to be both sweet and delicious. I feel like a monster of the dark ages when I first hear the sound of the meat searing over an open flame. Sometimes I'll buy veal just to let it rot, to pay tribute and honor to the rancid circle of life.

No, of course I try to give homage to all of these delicious animals by subsuming their spirits and portions of their bodies, by thanking them for sustaining me until my next meal of orphaned offspring, a bogle if ever there was one, I. This newfound love of cooking has really gripped me, the science of the lambs.

Ah, that never occurred to me. There is a famous vineyard here called Bogle. I suppose it is a family name, but I wonder if any European visitors avoid it for the obvious reason of wanting to keep their children from being eaten by whatever monsters lurk and prowl deep in the cellar caves.

I've been reading Shel Silverstein's Where The Sidewalk Ends to the boy before bed and I've come to the conclusion that his poems are mostly shit, even at a children's comprehension level. I can do much better, and I say that with little arrogance, but rather as an assertion of fact. I have a notebook of sketches started. I'll have to dig it out. His poems are definitely of a slightly different time, as well. Some of the poems almost shock the contemporary sensibilities in their jejune darkness, at least when compared to similar attempts by other writers, like e e cummings.

Two little known fun facts about Shel Silverstein: one here and the other here.

The boy told me yesterday in the car that he really likes The Giving Tree. I believe it was the result of me trying to get him to put his socks and shoes on so that we could go over to his friend's house to have dinner and he couldn't seem to focus on the task. And then it happened: I told him, I can't wait to one day see you with your own children, your own little boy, struggling to get him to listen to you or to do what you ask, and I'll just sit back and laugh and laugh and feed your son candy all day long.

No sooner had the sentence left my mouth that I thought, Fuck, fuck, fuck… is there simply no way to avoid the perennial cliches of parenthood. They sneak up on you and you become some thing other than what you had planned.

In the story, the apple tree is a female, but in truth apple trees are self-incompatible hermaphrodites, angiosperms that require cross pollination. Little know fact about the bullshit sexist nonsense that spewed from Shel Silverstein.