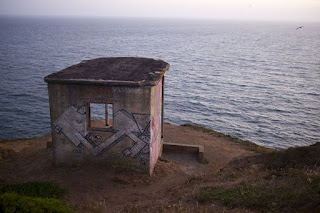 I invested my lunch break in a beginners yoga class. I was the youngest person there except for the instructor, and one girl. I was unlucky enough to only have the space directly in front of her to place my yoga mat. I assessed the situation as quickly as a man always does. I kept adjusting my shirt, but it didn't help much. Fat is malleable and flexible, but its carriage is not. She was the only person in the room that I cared about, in the yoga way. I felt as if we might have made a non-verbal connection, except for the fact that my staring was never rewarded.

The hour was spent gracelessly by me, though not nearly as much as some of the more advanced classes, where I am reduced to hopeless shame -piteous of motion.

Could that have possibly been any more telling?

I should stop pretending to be such a stalker, here. Sooner or later everything that I say, or write, or whisper, is held up against me as some version of my truth. Few things could be less true, but when you invite absurdity and make of life a perpetual joke, then the more serious-minded around you will eventually respond accordingly.

There are cops everywhere, and nobody likes a challenge as much as they love to assert.

Happened to me last night at dinner. I spoke a moderately embellished truth of my life desires and was roundly rejected by all diners. I pleaded, made my case, tried to reverse my own assertive logic, but no… A dinner table of close friends encouraged me to live life more like them and how they had, though they wished for me to do this at a safe, rural distance.

My buddy told me that I could not possibly handle the intense cultural engagement of his neighborhood. I nodded, solemnly. No easy answer there. I bought him one of the best bottles of wine that his Safeway offered, then we retired to his apartment to enjoy a delightful potato leek soup.

The conversation took a pensive turn whenever I stopped talking, though it was credited more appropriately to the silence than its precedent, my speeches.

I accept the response of my friends, in the full face of my life in the mirrors.

As I age, I see some new reflected truths in many things that I once enjoyed, or in those things that sing with inviting melodies. The truth is always familiar, or feels so. Age brings comfort in this one thing, I suppose. As those around you age, they expect you to accept a similar loss of the capacity to engage. If you don't…  Well, that is a version of truth also, though with a diminishing audience. The lungs of the lion that once roared have long soared.

A friend-girl that I had temporarily lost touch with pointed out a fun site to me. It's silly stuff, but I like her. It tickled me, so I share here… because sharing is the behavior that is best exhibited if the intention is to see its echoes elsewhere.

Convincing others is useless, it only happens before or during puberty. The idea of persuading people will ride you into your middle ages. Charm is timeless. Elder screams of warning will seem funny enough to somebody, soon.

Or, is it just hope that keeps one stirring soups of cooling jello; watching it congeal, nearly tasting the living of the moment.

In the standard home, no one gets to watch something freeze. It is hidden and happens slowly. Everybody can watch a thing boil, if they care to, though they bore and complain of doing so. The watched pot, and all of that.

The kids are kept at a safe distance, from boiling water and conversation.

The phrase stirred something inside of me today, something neither frozen nor boiling, nor quite yet jelled.

I closed my eyes and heard my breathing, and wanted someone else there to hear it with me.