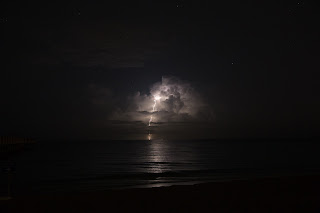 My new camera is already paying off in striking dividends of light. I took a woozy midnight trip out to the coast. I climbed down from my thrown unto the shore, waded out past the rocks and then back again, set myself up on a beached raft, one that was not entirely dissimilar from Tom Hanks' sea-worthy bamboo vessel in the cinema masterpiece "Cast Away."

I shot as if life depended in it.

That's not what this post is about. It is about my dedication to making better use of my new camera. Many agree that my son is the most beautiful child to ever grace the face of the earth and oceans, there is a grassroots movement to rename the moon, but still, the camera was expensive and we did not after all name him Christ as we had once originally thought to, from the east side of the lost garden.

A device does not need to justify its existence, but a creature should explain the purpose of its sacrifices, we do, unless we are to believe in the altruism of self, exposed as if.

Expression does so much more for the expresser than the recipient.

The image above is not mine, but neither is it rightly the thief's who stole it. I asked him if I could use it.

This lone vampire stood on shores unknown just to provide this scribed bilge with an adequate image to which attach itself; pure Lugosi.

Impure as blood, black as white as light.