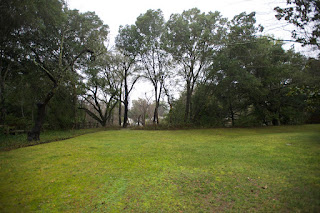 The boy is a reservoir for germs and viruses. He has been sick and because of my recent lack of sleep I fell prey to it, became a new host for something vile, invisible, and unexpectedly populous. I have spent the last two days inside the house with the blinds drawn, eating whatever food remained in the cabinets and refrigerator, spending many hours in bed, knowing that I would have to break the cycle at some point. There was a bag of garbage just outside the kitchen that had to go out and a new bag in the garbage can. It all became too much for me after two cups of coffee this morning, motivated with the artificial ambition.

When I opened the back sliding glass door and stepped out into the parking lot to head to the dumpster the sunlight arrived on my skin and eyes as a miracle. I could nearly feel the vitamin D being generated from it, just seconds of open exposure. It inspired me, enough. I opened all the windows and instead of working from bed I now sit at my desk. It feels better, at least until I tire.


My Nikon D810 should arrive today. I worry about the size of files that it produces, though I believe that I have found the best workaround, for now. I'll set it up to use the two cards as backup rather than overflow and have the CF slot set to primary and the SD as secondary. This should maintain my shooting speed and incur the least amount of time for the buffer to write to the cards, saving the smaller jpegs to the SD card, which has a significantly slower write speed (95 mbps as compared to 160 for the CF). I guess I'll need to experiment. These files will be tremendously large compared to the D700. Three times the size, though I suppose it does give me many more options to edit in post, something I rarely do beyond cropping.

I need to get rid of the already enormous photo library on my work computer, 340GB. It is cramping everything. If I can only import the images that I wish to work with then I should be okay. I can use the jpeg library as a reference, something I used to do when I shot with the D7000.

It has been some time since I've just gone out shooting, though. It is good practice to shoot something other than humans, and at an aperture other than the fastest that the lens allows.

I wandered into what used to be my back yard and took a few shots last week. It was raining and the ground was moist, puddles of muck in some spots. I walked to the back of the yard and looked down at the muddy river, but couldn't get the shot that I wanted without climbing down the bank, which I wasn't going to do with my new shoes, nor barefoot.


Uh-oh. I am doing a Time Machine backup of my computer and it has stalled, which is never comforting. One only wishes the progress bar to advance.

I should have a better relationship with my old data. 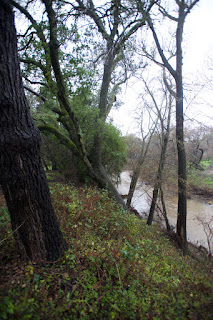 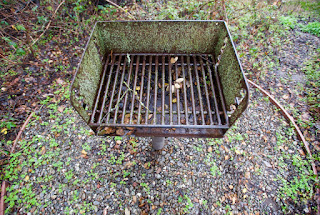