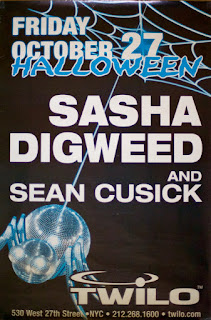 I guess not everything about separating is terrible. I keep finding little bits of my life stashed away in the closet. Or, more correctly: Rachel does, and she keeps giving them back to me. There is a funny story to tell about this poster but she and I are getting along so I'll let it remain where it is, dormant.

A few times I have searched online to find images of the old posters that used to be spread out all over the city (NYC) advertising the club that I used to play at, Twilo. They were everywhere when I would drive through the city in cabs, but they are nowhere online. I existed pre-internet, and most of the evidence of anything that happened then has evaporated.

I specifically looked for an image of this night, but couldn't find any proof of it. For how much this club was talked about in the early days of the internet I would have guessed that there would be much more evidence of it, visual and otherwise. This was before cell phones had cameras.

I just found this bit of factual error on Wikipedia: "Early in 2001 after Sasha suffered an ear injury in a car accident and was unable to DJ, John Digweed played the entire 8 hour time slot by himself until the closing of the club in May."

Well, there are a few inaccuracies in that sentence. It does not seem that Wikipedia needs me to be an editor or contributor at the moment, they just want me to contribute cash again, so I'll leave it all alone.

This party would have been in part a celebration of my 31st or 32nd birthday, in 1999 or 2000. Hard to believe, difficult to recall, impossible to deny.

I was in Vegas recently and a friend of mine asked how old I was and when I told her 47 she seemed relieved, then she said, "Maybe there's still some hope for me to be cool when I get older..." When you do not take yourself seriously, or seriously enough, people will think nothing at all of calling you old, though somehow it was also meant to be a compliment, which it was. But still…. She was quite pregnant at the time, so I imagine that she is searching for new meaning, looking ahead, peering into versions of the future, etc.

I tried to get her warmed to the idea of going to Burning Man, but no luck. The disparity between her personality and that event makes me chuckle a little bit. She is difficult to picture there. I would describe her to try to extract the joke here, but it would all be lost.

What I'm saying is there is something funny about the idea of her going to Burning Man, to me, and I guess I'm not up to the task of describing it here to make it funny, and it might all go terribly wrong. She is pregnant, so it is difficult to read what I might write through her eyes, etc.  She has  a good sense of humor though, and I should be less cautious.

Or, I should be more cautious.

I fictionalized a friend of a friend here a few months back because I found her delightfully impossible to ignore, though I was too shy to talk to her. Then, she found out that I had been writing about her. Then, of course, I met her. Writing about a woman in advance of introductions is a sure way to create an inelegant space between you and her. It might otherwise have unfolded differently. I destroyed any charm that I might have had because I had already conceded attraction. So, wit withered.

What am I doing. She might still read here. I really should up my stalker game a little bit.

Or, I should simply be more cautious. Or, perhaps just learn to talk to a woman that I find attractive.

That wouldn't be at all weird. She is only a few decades distant in youth.

Posting that image will probably re-animate a legion of clubbers that attach special meaning to that club and those times, but I've grown used to dealing with them. On some level I can even understand. There are times that some people look back to as being "their time" and this club seems to have fulfilled that definition for many. Ten years before that it was a place called The Beacham Theater, and on and on, ad infinitum, borne back ceaselessly into the past.

I've never been able to draw much comfort from the past, though I've tried; I remember how out of place I felt there at the time.