The primacy of possession 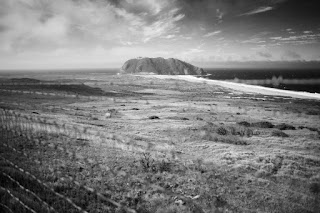 (A mountain of memory, moving out to sea)

I found a coffee cup that had lipstick on it and have no idea how it could have possibly arrived there. It must have survived a wash cycle and waited for me to find it in my kitchen cupboard. Rachel has stopped by in the mornings from time to time, but the only time I served her any coffee she has had her own cup. I distinctly remember it. No other woman has been here for a while, and none that I remember wearing lipstick. There's no simple or easy answer for it. It is a nearly erotic mystery, or has become one since I noticed it this morning, the mind of man being what it is.

I cleaned the cup to use it but didn't get all of it off. I sat and drank my coffee sharing a cup with a sensual ghost, our imaginary lips nearly touching. It makes no sense. What woman could have so thoroughly smudged my coffee cup without my noticing? She must really be something, for such a remainder of femininity to have survived through the wash and rinse cycles. I want to meet this woman that has snuck into my house and soiled my dishes.

On the drive home from school today the boy announced, I only want to see Mommy. I don't want to stay at your house any more.

I realized that no matter what I do I'm just a guy with a son. I'm not a family. My closest relatives are 3000 miles away, and there's only one of them that I even really know all that well. I've never relied on those that I am related to in a genetic sense as a family for the feeling of family, but sometimes it feels disconcerting, that at any sudden turn I could be completely alone, left to figure things out.

Having children can make life so much more troubling, at times, for me. Nobody wants to die, but the boy makes the thought more complicated, and more recurring. It's no trifling matter, this parenting stuff.

I'm going to feel like such a clod when I finally remember who this woman is, then be forced to acknowledge that the only reason I didn't remember her so far is because we were not intimate. What sort of a brute uses their memory in such a way.

I'm almost afraid to publish this. What if it was an escort or worse, a woman who was paid to stain my cup, and why was I serving her coffee. Which is more shameful, I wonder: sex as an act of commerce, the forgetting of it, or the serving of coffee before, or after. There was lipstick nearly around the entire circumference. I suppose it's possible that the cup was somehow involved.

The mind is a silly, terrible thing. That it would let this woman move in and take over in this way, without ever having even met her.