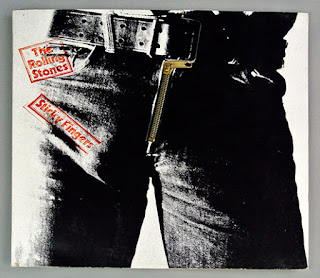 What a great rock and roll album. Oh man. I listened to it in its entirety at the gym this morning, sort of. I always skip over "I got the blues." That song is almost useless. One wonders what they were thinking, if at all. If I don't listen to it for a few years then I can sometimes go back to it once, hear it fully, then think to myself that it is not as bad as I've previously claimed. Then I'll listen to it again…

I picture a hotel party, summer of 1971. The Stones are wandering in and out while this album is playing. Mysteriously, Mick and Keith are both absent during this song, always. They would seek to avoid eye contact with anybody during such a shameful private spectacle. Then there must be the girls, occasionally relaying how it's just simply their favorite.

Or worse, the dudes. Always, they are so much worse.

Could they think of no other line: "I've got the blues"…? A song should make the listener feel a thing. The horns at the end do little to assist in this regard.

The Triumph of the Abysmal.

I'm okay with sexism as long as it is couched within rock and roll lyrics. I even like some of the flagrant sexism of the better gender. Few things make me as happy as hearing a female country singer denigrate men, and announce that she can easily find another, if she chooses. It tickles me. Freedom.

Racism is still, of course, terrible, but something about sexism just feels so natural.

Well, of course the careful reader will recognize that I am not kidding here. If sexism is so hideous then why does everybody engage in it sooner or later? All that you have to do is not let them talk, and sure enough, they'll eventually trot some out. Doesn't matter what gender they are, or wish to be. It is nice to see women united under the banner cause of "Feminism." You know, just give up their usual personal in-fighting and competition for the purpose of advancing a cause. All of that.

Sexism is like taking a hideous old mangy dog for a walk in the sun. Nobody wants to see it out there, but there is something nice about it, knowing what it must feel like for it to finally get some sunlight on its sporadic fur and lumpen skin.

Like taking Gollum to the beach. Putting a little suntan lotion on its back, spreading it out evenly. Then just sitting back and enjoying the music of the waves cresting gently against the sand.

When you're sittin' back in your rose pink Cadillac
Making bets on Kentucky Derby Day
I'll be in my basement room with a needle and a spoon
And another girl to take my pain away...