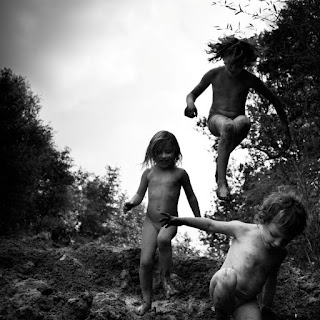 I have had a tremendous outpouring of shock and alarm since announcing that I wouldn't mind having another child. The responses have ranged from accusations of irresponsibility to concern for my state of mental health, even to talk of a late-term abortion. I'm in no danger of having another child, so everyone can rest easy knowing that a baby will not be the result of a Jaegermeister fueled evening.

It's not that simple. My abdomen suffers from the careful gestation of adipocyte accretion, nothing more.

It's merely something that I've been thinking about. I write about a number of things on this site, absurd and otherwise, few subjects elicit the sort of responses I've been receiving since stating that I'm not opposed to having another child. I once proposed a race track where midgets (or even dwarves, if they qualify) could ride on dogs for the exclusive pleasure of a live gambling audience. This didn't get a single response. Subscription based hobo-hunting likewise garnered no public outcry, nor did it generate a chorus of support, it should be noted. But dare I state that I might want my son to have a brother or sister and there's been the arrival of a steady stream of telegrams expressing an array of anxious worrying from each and every corner of the civilized world.

One doctor suggested that I quadruple up a rubber band around my testicles to kill them on the vine while I still have the chance, before they escape and inflict their malevolence upon the world. The villagers have amassed outside my door with torches and flaming pitchforks, bags of pooh, demanding that I publicly reduce myself to a hobbled gelding. They will not rest until my empty scrotum is on display in the town square.

So, left with little choice: I formally rescind my public fantasies and daydreams. All of them, even the barely whispered wishes and whims… to stardust they each return.