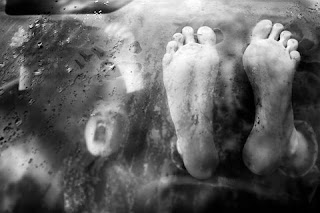 A dream that mom and dad were still alive, or perhaps I was a child again, or both. Running through fields of sunshine, there was some soft giggling, a weightless vignette of charms concerning unfocused childhood.

Not sure, though I woke up in an odd mood to an empty house, a nearly untenanted space where ghosts had been paying the rent, whispering and chanting their copy of the lease; of lost agreements never read.

To look at the eyes, which hardly age, save for the skin surrounding them - what they choose to see.

I don't live anywhere. There is only a place in which I can lock the door twice. Nowhere here offers privacy from the mind, from the voice of self. It is all there, of late. Everything disappears, death is never far off. Things vanish, tasting of what once felt as the tickle of love. Nothing lasts in some other form, some other way. Nothing recognizable, but everywhere felt. Faith prevents one thing from becoming something else.

A requirement, the horror of loss, the nature of life, and that of the living. Belief is a form of denial, by necessity it must be. A thing must not be another thing, but only the one thing that it believes itself to be. The sole object of the object is the subject of the subject.

Told by mystics and seers and women that there is an inner refusal to see, a blockage of will - an explanation that seems simple enough to me, though much clearer to them. Always.

Many wish to first convert others' doubt to a glimpse, next a belief, then to the faith, the conclusion of conviction.

Dreams are less interesting that tattoos, nearly as permanent.

Hell must be a piping place with any number of private and public lounges where we'll all be free one morning to discuss.