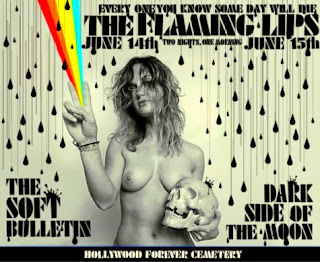 I was surprised at the material they chose to perform last night. It was not what I would have expected. It might have been more appealing to me, I think, if I had been high on drugs. That's how you know music is good... when it requires drugs to really get into it, to get inside of it...

I only partially kid.

I mean, I'm sincere about the statement, and its intended irony.

I used to suffer that sentiment a lot: people telling me that I might like certain music more if I was high.

You have to be on a certain mental plane to really dig it, man.

But, I liked the stuff that The Lips played last night. It was material that I would not have guessed that they might have chosen, and for that I applaud them. I guess it depends on what you want to consider "crowd pleasers," and then of course there is the crowd to consider.

I think they went out on a limb, with it being Halloween and in San Fran, Wayne Coyne started to give a speech about how much SF has meant to them - but then he binned it, thankfully. It was borderline weepy, or was headed that direction anyway. We were supposed to all fondly reminisce upon their early days...

To be honest, I did. I wished that they would have played stuff from "The Day They Shot a Hole in the Jesus Egg" or more material from "Clouds Taste Metallic," and the older stuff.

But that is precisely for that same reason: I am old.

It wasn't noisy enough for me. It was too lush, for too long. Thursday night is a tough night for double-dropping ecstasy at a rock show, though clearly not by many other people's standards, etc.

I have a "review" at work today, one that might determine a few different things for me. I have an interview this week for a promotion to a more complex job. Another interview sometime later this month, for yet a different position. A very important meeting on Nov. 5th, and then another on Nov. 18th…. I haven't even had a coffee yet.

"You realize that life goes fast, it's hard to make the good things last..."