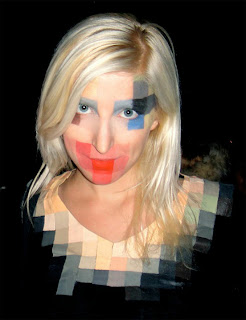 I have two close friends who share today as a birthday. I have always been slightly jealous of them for this. Halloween has seemed to me to be the best of holidays, though by many standards it does not qualify as such. We get no day off from work, the banks and many businesses remain open, but you do get to choose to be something other than yourself, briefly. Or, you get to be a hidden part of yourself, to inhabit a moving fantasy. Certain people seem to relish this function, and of course their chosen role in it. It gives them a temporary courage of sorts, though they tend to do the same things that they would do otherwise, which requires no real courage at all.

Some might say: If Miley Cyrus, then why not me?

For children, it is a yearly attack against the very idea of growing up, a full-frontal disguised assault against maturity. Candy illicits gathered from neighbors in darkness, then respectfully thanked as a running after-thought, goblins having been parentally reminded.

It's Catholic, I think. So, there is some resistance to its open acceptance. Mardi Gras is also a Catholic festival, like Carnival.

If you have ever been curious about the spirit of New Orleans but do not wish to suffer the region during Mardi Gras then Halloween is the time to visit, says the ever-wise I.

Many cities come to life on this day but the French Quarter is really something curious and strange; an empire of delicious faults, the genius loci of the big easy. There are notions felt there not felt elsewhere, mysteries of passing. Difficult to describe, impossible to forget; nameless matters moving around, and through. It is a place to which one must bring their fantasies, to give them form. There seems to be a thinning of the membrane that separates worlds, a shedding of the heavy integument. One can nearly touch the other side of something barely sensed, never seen. There is a great desire to give over to something unknown, to grasp gently an unsolved puzzle, the amorphous whispers of the enigma.

'Perhaps,' I thought, while her words still hung in the air between us like a wisp of tobacco smoke - a thought to fade and vanish like smoke without a trace - 'perhaps all our loves are merely hints and symbols; vagabond-language scrawled on gate-posts and paving-stones along the weary road that others have tramped before us; perhaps you and I are types and this sadness which sometimes falls between us springs from disappointment in our own search, each straining through and beyond the other, snatching a glimpse now and then of the shadow that turns the corner always a pace or two ahead of us.'