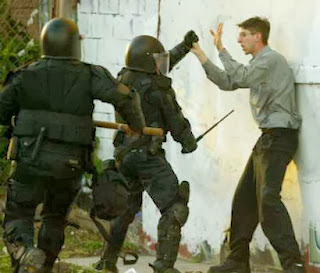 So, yesterday I had been asked to babysit the child of some friends.

It was Dad's birthday, Mom wanted to bring him out to a movie.

I arrived at the appropriate time, got out of my car with the steak I had bought for dinner, as I have done hundreds of thousands of times before, and the alarm went off on my car.

I couldn't turn it off. I started frantically pressing buttons on the key, putting the key in the ignition, turning it, starting the car, panicking. It suddenly turned off on its own, for reasons unknown.

I went in the house, said my hellos, got Dad's keys so that I could take the boy over to see my boy for a little play-date, put him in the car, got in, put the key in the ignition, ALARM. The horn started honking, lights were going off, the boy was laughing at me. Daddy, he popped his head out the front door and asked if everything was okay. I must have done something right, eventually. The alarm stopped.

- How can this be?, I thought. Beginners luck.

Things went swimmingly on the play-date. We ate dinner and then all had a flashlight adventure in the dark, exploring the neighborhood, the back yard, the trees and the stars. We carried with us a book that, when illuminated with the flashlights, with the lights then turned away, would glow in the dark. Star formations that we were meant to find in the sky would glow at us. The stars appeared, as if by magic, above us, and also there in our hands.

Then, later, it was time to take the boy home and put him to bed. I unlocked the front door, turned off the alarm, and began the routine of getting him in a fresh diaper and his pajamas. We worked together on this and it went surprisingly well. I put his bottle in the microwave for 40 seconds, put the cap on, shook it up, brought it to him in his crib. The boy was pleased and quiet. I closed his bedroom door behind me and went to the living room where I prepared to watch some television, my new hobby.

As I prepped a pillow on the couch to sustain the substantial weight of my head an ALARM went off - a very LOUD one, PIERCING. I ran to the place where the alarm remote is kept and pressed OFF repeatedly. Nothing. I tried to call Mom and Dad in the the theater. Their phones must not have gotten a very good signal. It is a problem with that theater. I texted. I raced around the house praying in tongues, offering alms to the alarm gods.

At some point I must have pressed the "panic" button on the remote, thinking (and somewhat rightfully so) that this was most certainly a moment in which to panic. There was a child sleeping in the house and I needed immediate help from the alarm company.

This was not the right thing to do. I recognize that now from the comfort of the following morning and a good night's sleep.

Finally, Mom and then Dad called me and we rapidly discussed the alarm code and how it should be input into the wall unit, to disable the alarm.

- No luck. I tried it hundreds of times. I wanted to be certain.

They decided to discontinue their movie and walk home. The theater being only a few minutes away on foot. A few minutes of panic and screeching alarm with a child trying to sleep in the other room, having gone to bed without his Mommy and Daddy. Now this. The possibilities were potentially disastrous. I knew this.

There was a knock at the door.

They'll understand. Who better to help in a crisis situation. Who more capable and well trained to bring understanding and compassion to a strained circumstance. Who?

Cop, he was very understanding; chuckling with helpfulness, even.

I didn't find out until afterwards but Mom had already called the alarm company and told them that this was not an emergency and that I was a trusted friend. Was.

This had been communicated to the cop before cop knocked on the door. Cop didn't bother telling me any of this.

I envisioned some free transportation to the Sonoma County Main Adult Detention Facility, with perhaps some light pepper spraying and a few punches to the kidneys.

But instead, I invited cop in and he tried to turn the alarm off also. No luck. Who better trained to intervene in a crisis situation.

Mom and Dad came home during this and we all chatted amicably together as the alarm raged on.

Mom called the increasingly useless alarm company again, becoming verbally agitated. They assured her that they had done what they were supposed to do on their end.

Dad walked around the living room asking where the alarm was coming from. We searched its source. It was very high pitched so we naturally looked up to the corners of the room where it seemed to be coming from. But no, that wasn't quite it. Finally, we arrived at the couch, where, when we looked down, we discovered and realized there was a doggy-alarm pad designed to keep dogs off. A throw pillow was touching its edge.

Disabling it was alarmingly simple.

The dogs were sitting on their bed on the floor, both looking up at me, untroubled, quite happy to be home.