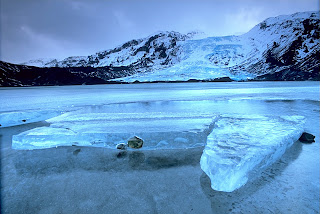 (the view this morning)

I fell asleep with the window open. I awoke in a state of frigid suspension, unable to get out of the bed to piss, too cold to stay, my body shaking with the mistake. The sheets felt as though they had evaporated into the night. All that remained was a thin hint of what they had been. They weren't trapping any heat but rather only inviting the demonic cold to pass through. It felt as if I was sleeping inside a ghost. The darkness never helps. I struggled to find my phone in my underwear.

I have since closed the window, but I sit here now fully clothed with a scarf and pullover fleece hat on, still chilly. I am eating popcorn out of a bag. Breakfast, etc.

It is something that I must not forget, the window. It will not defeat me again.

"We're goin' out where the sand's turnin' to gold, so put on your stockin's baby, 'cause the night's gettin' cold…."

One of my favorite Springsteen lines. He has a few of them, particularly on Nebraska.

"At least for a little while, sir, me and her we had us some fun."

"In the wee wee hours, your mind gets hazy, radio relay towers, c'mon and lead me to my baby… The radio's jammed up with talk show stations, it's just talk, talk, talk, talk, 'til you lose your patience… Mister state trooper, please don't stop me…. 'Aint somebody out there, listen to my last prayer, hi-ho-silver-o, deliver me from nowhere."

"Your eyes get itchy in the wee wee hours, sun's just a red ball risin' over them refinery towers. The radio's jammed up with gospel stations, lost souls callin' long distance salvation."

Yes, that album. One of my favorites, a lo-fi reinventing of the past.

Perhaps there is a secondary meaning that she may have intended. Effective, etc.

I have begun reading Steinbeck's East of Eden. I've felt that he was a very good writer but that he would grind his agenda against the reader, too much. He was insistent on always making some moral point, of standing up for some principal. Bad is bad and good is good. Too often it stood in the way of the truth. We'll see how I feel about his masterpiece. Perhaps a Laureate Aesop of the 20th century is what this time requires.

That is what I'll call it. Until the next time.