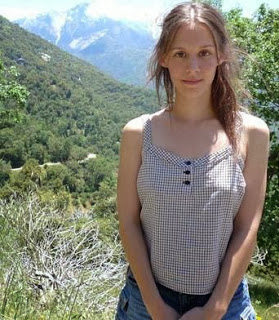 Charisma, the kid's still got it.

Hollywood really does know what to do with unfiltered talent.

Who are we to judge true love, when it blossoms under the most unlikely of conditions. I'm sure that Star, 25 yrs old, is just after all of the exhilarating dual near-death sex with Manson, now 79. It must be exciting to wonder who's going to end up sliding into the great beyond first, by will or by fate.

She claims to be attracted to his very pro-environment writings.

"Charlie's put most of that apocalyptic race-war stuff behind him. We just want to make a nice home together now. The earth needs our help."

She was kept in a closet and beaten with wooden bibles for her first 20 odd years on this planet. Then, to think... by the grace of god's tender hand... she emerges from that loving dungeon and finds true purpose in the eyes of a visionary. Those eyes are, of course, situated just below the swastika tattoo found on his lower middle forehead.

That's some face to have hanging over you in the act of coitus delicti.

What a genuine wonder is god's guiding hand, or hands. Perhaps this will be the subject of my Thanksgiving Day speech/prayer: "Love will find a way out"

When I was still in high school, the year I dropped out, I was asked to give a speech to our advanced English class, part of the school's "gifted program."  I hadn't prepared anything, but I had recently read Vincent Bulgliosi's account of the Manson murders, Helter Skelter.

Now, the school was under review for additional financial aid and there were inspectors walking the hallways, dropping in on classes, inspecting, etc. We had been warned that this might be the case.

The subject that I was given to produce a speech on was, "Somebody you admire!"

Let's be clear: I never admired Charles Manson. Ever. But I was a youthful rabble-rouser, or so I thought, and I had frightful powers of memory. I still do, sometimes, though my powers have been flagging lately and in need of some repair. Now, I am more comical than astonishing.

But, I had been quite taken by a courtroom speech of Manson's. I believe it was as part of his pre-sentencing conviction statement.

Mr. and Mrs. America - you are wrong. I am not the king of the jews nor am I a hippy cult leader. I am what you have made of me, and the mad dog devil killer fiend leper is a reflection of your society. Whatever the outcome of this madness that you call a fair trial or Christian justice, you can know this: In my mind's eye my thoughts light fires in your cities.

Cool, I thought. This guy has a bit of a Jim Morrison vibe.

I went on to discuss his willingness to do what he thought was right, and needed, even though it flew in the face of traditional mores. Blah, blah, blah... I was just making stuff up, nonsense of course. But I may have believed some of it at that time. I was moved by my impassioned words of dedication to a cause. He seemed to be a sort of anti-Gandhi. By association, so did I.

I believed in righteousness, brother.

Not any more, it has been beaten out of me. I just want to pay my taxes. If it were possible to pay them directly at the local police station then I'd be the first in line and would offer to help clean up afterwards, serve coffee, etc. I am a model citizen.

But, I look on Facebook and see similar sentiments to the one spoken above by little Mansons everywhere. That whatever horror befalls the people of America, it is all their own fault. Not only do they deserve it but there is pleasure to be had in them unwittingly getting it. People love to see a graceless fall from imagined grace. Then, there is only left the matter of questioning the true height of the fall. People hate the feeling of obligation, to watch others lose, particularly if they don't openly admit losing. They will resent you for it, having to explain your loss to you. It is beneath them, or should be.

If the pic below doesn't look like a Facebook "couples cutie pic" then I simply don't know what does?

Manson says, "Oh, that..." when asked about a possible marriage between the two.

But you know how guys can be about commitment. 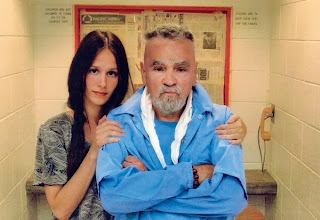