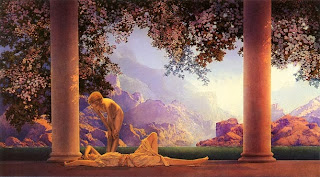 A friend tried acid for the first time yesterday. LSD-25, that is. I enjoyed the stuff very regularly when I was an aging kid. Some might say a little too regularly. But who am I to judge?

I thought that magical life was made of the stuff, that I had discovered a secret key to the universe, neither of which quite turned out to be true. But I sure got my kicks for a while.

I told myself all sorts of crazy things, some of which I still believe. I told myself that as I got older if I still did not regularly trip every now and then that would mean that I had caved in and had become old, too set in my ways, unable to face myself, afraid of what I would see there in that compressed and private world.

For anybody who wishes to know what the visual aspect of the drug is, there is this. It approximates that one part of the experience pretty well, though it doesn't last very long.

Think about what your mind must endure visually in that experiment to "trick" it into seeing that way for a few seconds, and then reflect upon how long the acid trip lasts…. It is thoughts like that which keep me from re-imbibing, I think. That is one king hell powerful drug.

Every day is burning, man.

It is beginning to look like I might be able to attend Burning Man this year. So, there is that, anyway. I will have to check into camp sites for lone retirees. I will insist that a few friends of mine who have yet to go will be there. I will approach the festival with a religious fervor.

My life is changing. There is no going back to the way that it was. There never is, but it is what we tell ourselves we might want, the comfort of the past.

Dylan warned us about thinking that way:

You never turned around the see the frowns on the jugglers and the clowns
when they all come down and did tricks for you
You never understood that it 'aint no good
You shouldn't let other people get your kicks for you….

The painting above is what my friend sent to visually approximate her experience.

Maybe I should give it a try again, acid. Maybe I have forgotten the keys to the kingdom.

Perhaps it will make it possible for me to come to better terms with aging. Because nothing seems more appealing right now then a nice strong liquid dose of the stuff and a long gaze into the mirror of my own eyes.

Then take me disappearin' through the smoke rings of my mind
Down the foggy ruins of time, far past the frozen leaves
The haunted frightened trees, out to the windy beach
far from the twisted reach of crazy sorrow
Yes, to dance beneath the diamond sky with one hand waving free
Silhouetted by the sea, circled by the circus sands
With all memory and fate driven deep beneath the waves
Let me forget about today until tomorrow