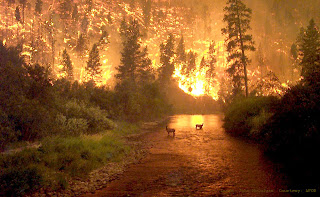 My Esperanto/Haitian Creole experiment didn't work as well as I had hoped. Google translate has drastically improved, too much so. It's not as funny as it used to be.

I sit here dreading the idea of going to the gym. Maybe if I drink a few extra cups of coffee then I won't feel like it. I'll have a reason not to, the queasiness. Or, maybe if I don't drink enough.

We had some friends that had to cancel their plans to go to Tahoe this weekend because of the fire. It has become the fourth largest in California's recorded history.

Online, the rigorous scientific surveys of the Facebook community would have you believe that Fukushima is already killing millions of people. Things are getting worse there, but TEPCO assures us that it's still only somewhere between 10-50% as bad as Chernobyl was. Currently there is 2.5 more times the amount of highly radioactive material still there that is waiting to meltdown if everything doesn't go as planned upon removal, perfectly as planned.

Apparently, the rods all have to be removed manually as the reactors are damaged past the point where the automated process is still a viable solution. If anything at all goes wrong in that process it can trigger an irreversible chain reaction which could result in a complete and total nuclear meltdown.

When California finally does its quake-slide into the atomic ocean, trying to desperately escape the wildfires, at least we'll have the comfort of knowing that the water there can no longer sustain life. Well, except for Godzilla and Jesus, everybody knows that.