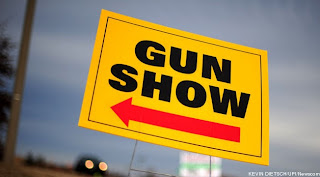 Well, I'm up early enough today to write a little bit, I hope.

George Zimmerman just can't seem to get a lucky break.

I have an online friend who is a outspoken advocate of gun rights and he insisted the entire time upon George Zimmerman's innocence. It seemed far too implausible to him that GZ would call the police and then shoot the kid, if that had been his intention.

I had a slightly different take on it. I thought that he seemed like the kind of guy who had thought all of this sort of thing out a few times in advance of the shooting and he very well might have done just that; called the police and then stalked the kid into a confrontation in which he would then seem justified in killing him.

You see, people who buy and own and carry guns regularly engage in shooting fantasies. Not all of them, I'm sure. It's just that I've never met one who didn't, and quite willingly. They will trot out endless scenarios that they have crafted - or been helped with through collective fantasy - in which they can discharge a firearm into the belly of a bad guy. They also have reasonably rigid ideas about populations of good and bad guys, specific neighborhoods, etc.

It's not that they're wrong, of course, but rather that they seem hyper-focused on their rightness, their justifiability.

Guns have a highly imaginative component to them. They are not "just tools" like a rake or a wrench, as has been suggested. They are, and have been, blasted into the American psyche in many ways, across many ranges. There is no getting rid of them and anybody who suggests such a thing is a fool, or worse. Guns seem to ignite something within certain people. At once they give the dreamer, the holder, a sense of power and justice, all in a personally owned, government sanctioned, handheld device that they (hopefully) control in the face of sudden danger.

Try telling this to any of them. They will often launch into a scenario in which your wife and children are being raped by bad guys and wouldn't you want to own a gun then? It really is that easy to get them to fantasize about the most horrific scenarios. Just talk to them. They will lapse into fantastic imaginary anecdote and speculation, though when you point out to them that that is an important component in gun deaths also - the pre-imagining of usage - they will dismiss you as "liberal."

All the while ignoring the elephant gun.

It's a similar idea to amassing an army that never goes to war. It is a waste of money and misses the point, for many. A military is meant to be militancy in action. An unused gun gives an imaginative power to its owner but robs them of an actual power. Time prepares them to change all of that. They wish to convert the potential to the kinetic. So, they drive their cars and police the streets and target others. The bad guys. They will be sitting at a traffic light and a sudden noise from the car full of youths next to them will trigger an enactment reverie, their minds will spring into bolt-action. They practice reaching for their safely concealed gun over and over in their minds. They discuss during coffee the how and when and where and what of these incidences. I have heard them and engaged them often on this level.

I'm not saying that there is anything necessarily wrong with people who go have little paint-ball battles. I'm only saying that certain presumptions can be made concerning the nature of one's fancies, and the willingness to enact and engage in those fancies. When you are buying special clothes and accessories to pretend to shoot strangers in the woods then something inevitably must be thought about such a thing. The overdevelopment of this in a child would cause concern for some, pride in others.

But there are others, those that do not imagine caution in usage. They replay, over and over again, their favorite justice theatrics. They allow themselves many imaginary kills. All they lack is the orgasmic moment when that desire becomes a squeeze, a flash, and a deafening burst.

It is my opinion that GZ is one of these. Mildly obsessed with self, always prepared to prove, etc.

Some will read these words today and insist that what I am saying is that I only want criminals to have guns. Or, that I want the Constitution to be set ablaze. Or, that I want children to be raped while attending public schools, and as often as possible.

It saddens me that I feel that I have to say this, but: nobody wants any of those things. Well, there are some that might wish to do away with the C. Those that confuse capitalism with democracy, thinking them the same concept, unable to exist without one another.

I was chatting with Selavy the other day, we were discussing the NSA. There is so much more information coming out now about how they have compromised the safety and security of all electronic communications, and our governments have made it illegal to speak of their illegal activities.

He responded, "... it is hopeless to even think about anything like anonymity and security. But as always, the thing to do is live in the open, do only what you believe in, and prepare to be raped and beaten by anybody who disagrees with your life code. And they will do it, too, because there are not so many smart people as one would hope. But there are plenty of sick, twisted, and mean."