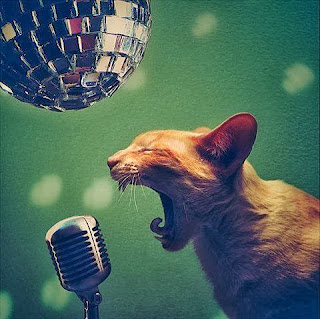 This morning, I return to the gym. It has been a few weeks. Three of them, and then some change. I am psychologically preparing myself now; coffee on an empty stomach. It is the only way: two cups every morning. It causes me to dream of rats each night but what is one to do? The goal is to remain strong. Anybody that doesn't dream of rats is a pussy.

Are we allowed to use the pejorative pussy? A friend used the abbreviation "p.c." this morning instead of an actual derogatory term denoting male tenderness or sensitivity. He was referring to himself, so maybe that's what makes it okay. It is Personal Correctness.

Does this mean that I'm a pussy? Oh dear, I do hope not.

It's a silly word - over my lifetime, since puberty, it has become psychically connected to the actual thing, the vulva. The mere mention of it will make me stop, turn, and look and look. There is always a sensation of where, where...? It is the reaction of a dog when a squirrel enters his periphery vision. The limbic brain awakens, the core tightens, the stance changes - the tail wags, lifts, and stiffens.

Pussy. It is not uncommon to hear men accuse one another of it, as an adjective on its way towards becoming a noun. It requires no conceptual power at all to understand the deeply homo-erotic nature of such a presumed abuse. To claim that one of your male friends is transforming into this thing that you affirm a deep sexual attraction to, and fascination with... This inverted magic is meant to be an insult rather than an invitation.

It is more rare to hear a man express to a friend, "You look good today, man, like a really strong pussy. You been working out, bro?"

It can also be used as a condemning threat of sorts, "Come on, you fucking pussy!" Impossible to determine the intended meaning of the word 'fucking' in that sentence, or 'come' for that matter.... an invitation to very suggestive violence.

I'm trying to remember if I've ever heard a gay friend refer to anybody else also gay and male as a "pussy." I don't think that I have but I have heard a lot of things and remember so few. Being a nightclub dj gives you insight into rare incident, hilarity that will not come again. The idea does make me giggle.

I feel as if I could reconstruct its happening and then have it become real.

I used to have this friend, a girl, who I would regularly and jokingly call a "dick," whenever she was being one. She did not seem to mind and even thought it was funny, that I was being so candid with her, and intentionally awkward. The opposite of being forced.

There is another story to tell of her one day, though perhaps not today, perhaps never. I don't mind relaying harmless, anonymous stories, but this one is borderline cruel. Cruelty is one of the unforgivable sins. I know. I was cruel to this kid once. I've never let myself forget it, nor he.

So, with no options left I just continue to treat him cruelly whenever the opportunity arises.  I should be outgrowing all of that, soon, but... ah well. He has grown very sanctimonious over the whole thing, which only raises my ire and dulls my wit.

Sadism is fascinating. It's just so difficult to find the right crowd for it. They are either all far too intense or they're all just a bunch of fucking masochists.