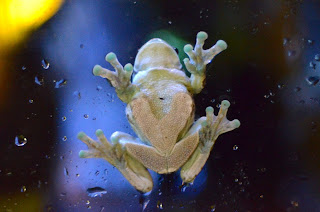 (This frog tried to lick my back)

I think I'm going to grille a steak for breakfast this morning. Why not? That is decadence at this age. At any age. I only wish I had a bottle of cabernet to go with it. Steak and wine Sundays, with maybe some jazz or blues. Nothing too heavy, or loud. Something inoffensive, pleasant even.


I stopped by the new gym Friday. It recently moved locations. This means that I will have to start working-out again. I had given myself a break, time for my body to heal. But now too much time has passed and my body is relaxing, moving towards a different version of health. I look like a melted Play-Doh model of my former self. I pushed my thumb into my chest and it left an impression.


Yesterday, we went in to the city, to the park, the California Academy of Sciences. It is a pleasant diversion for the little guy. We like it also. It gives me the opportunity to use words like Lepidoptera and Salientia.

On the drive home we saw America's Cup occurring in the vast San Francisco Bay as we crossed the Golden Gate. The Oracle was gliding alone across the water towards us, making its eastern turn, surrounded by about 300-400 yachts and boats in a semi-circle, watching. I bet they're all eating steaks also this morning. Perhaps something even more decadent. Is such a thing even possible? It seems inconceivable. Maybe in Bangkok.

I tried to tell myself that watching a boat race at the race is boring. It is a sport better watched on television. But then was reminded that being on a yacht in the bay is much better than watching any television, particularly as many of those yachts would have that luxury also.

Ah, well. It's because I don't have a cool name like Jimmy Spithill or Floyd Mayweather Jr. 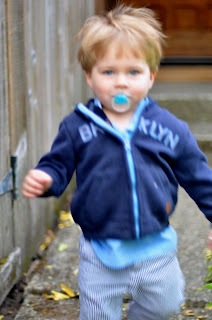 Yesterday I got a "new" collection of Bob Dylan b-sides and unreleased versions from 69-71. There is a traditional on it, Pretty Saro, below. It is for all of those who ever claimed that ol' Bob couldn't sing. An online friend tried to claim that, though this may be good for Dylan, it was still awful singing. I told him to record his version and I'd post them side by side. That shut him up, for now.

He is not the sort that stays shut up for long, though. He was singing the praises of Iron Maiden a few weeks ago - that sort, etc. - making wild claims about their "musicianship" and nobility. Nonsense.