Oh moon, what are you sinking about...? 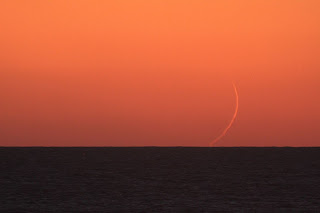 Writing isn't as much fun in the morning since my buddy Selavy quit. I know it shouldn't matter. But there was something to read before I got started, sometimes a launching point. Now I just stare dumbly at NASA's apod website and hope for the best, wait for the coffee, take the garbage cans down to the street slowly.

Yesterday I couldn't remember the correct address of my old apartment in NYC. I had to look it up. I was off by two digits. It's a strange feeling, that. To recognize the slipping into forgetfulness, the sense that a fog is settling in at noon, or just after, before a nap. I have begun to argue less about facts, to embrace essences instead. I'll be praying to Jesus in no time. He'll be happier to have me back than if I had just pestered him with loving prayer this whole time. That is what he taught us: god loves a wanderer returned - as long as I make it home before apocalypse.

Ok, none of that.

I've had a rough emotional time in the last few days. Lack of sleep helps nothing, but neither does arguing with your mother-in-law. There is no victory, only a lingering sense of mutual loss.

I don't know why I don't just do what I tell myself I'm going to do: stay in my room and read. My participation is not required. Absence would be preferable to conflict. It provides less and that is precisely what should be emphasized.

Ok, none of that.

I just deleted a screed, that last sentence was its launching point. It was going nowhere, or rather it was drifting somewhere too suddenly.

"Unconditional Love" does not mean that no condition can possibly satisfy it, but instead means the opposite.