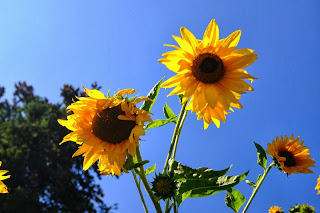 Internet traffic is strange. I shouldn't note it as I do but it is difficult to avert the eyes, particularly when I've clicked that page for the very purpose of looking. There are some days when this site will get hundreds of pageviews, then other days when it will barely crack a hundred. It rarely has to do with the writing of a single post, though it's hard for me not to feel as if it does. The numbers tell a different story.

By the next day I have already forgotten the post from the day before, forgotten much of what I've said. When I see people out and about in *real life* they will reference something that I've written and I look at them as if I've come straight from a Flowers for Algernon experiment.

Life can be seen as a fluctuation between intellect and emotion, but that doesn't make the observation accurate, or meaningful, or even useful. Assuming opposites in nature does not mean that they are actually there. It says as much about the mind of the viewer as it does about the nature of reality. If intellect is opposition-based inquiry then it's no surprise that opposites are then discovered and codified by that intellect.

Then, it follows that if no true opposites exist in nature then they share no unity in opposition. People are not bi-polar, they are merely dynamic in varying directions and to varying degrees; unexpectedly eccentric, difficult to pin down, best to strap...

Opposites are easy to assert and establish mathematically but not even in fundamental interactions do we truly find them. Gravity is always attractive and the other three known forces are of the discreet quanta kind.

That's my observation for the day. I was told by a friend that perhaps I see life as a continuum where others might see it as stages.

But, since we have lately begun to question the continuum, and we've known since Shakespeare that all the world's some stages...