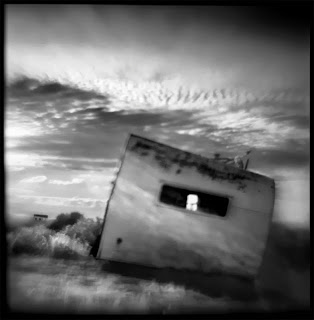 A good friend, and dedicated reader of emails, told me that I had never once told her about the strange encounter on I-10 that I relayed here yesterday. It seems impossible. She lives for stories of that kind. Certainly I have relayed all of my paranormal stories to her already, many times. I even remember she and I once discussing my cynicism, doubt, and lack of faith in the supernatural, and the unlikelihood of visiting extraterrestrials. She then asked, as always, if I did not think there were some things that were unexplainable. How could I disagree. I tell that story often when people suggest that I don't know everything.

It is always possible to assert man's ignorance. Or, even more specifically, mine. It is easily proven.

But, I had a very strange and emotionally charged encounter with a human-shaped creature in the middle of nowhere, without an entirely adequate explanation. At least no explanation that leaves no lingering questions at all in my mind. It doesn't really change anything, though. Occam's Razor tells us that it was most likely a human. That simple explanation satisfies all of the perceived criteria. Inductive indifference is a powerful tool of reasoning, specifically in approaching seemingly unexplainable experiences. All logical observations conclude that the creature was human. It is only when emotion enters the assessment do we begin to suppose and speculate, and even wish for something else. All activities that I spent the next several months engaged in.

It is important to remember a few things: there have been many, many UFO sightings, encounters, and presumed "abductions"... There is not one agreed-upon piece of empirical evidence of visitors from another planet. Does that not strike some as strange? For some, it only proves their higher intelligence, their ability to make contact but leave no trace. For others, it only reflects a lack of evidence. I am one of those.

How many encounters have been disproven or otherwise explained? Many of them. This does not mean that it is not possible, only that there is no evidence. Eyewitness accounts are often quite lacking in unexplainable physical evidence. Science does not treat these as worthy of inquiry for a reason.

Have humans been shown to be highly imaginative, and to allow that capacity to form entire structures of agree-upon fantasy? Yes, there is much global evidence of that.

Again, inductive indifference teaches us that among like things certain predictions can be made based upon logical observations of a given series of symbols.

- It was shaped like a human
- It walked (though somewhat oddly to appearance) as a human
- It was covered in a fabric, a human invention
- It had a glow to it when not in the direct light, possibly phosphor
- It occurred near a university town where there is a greater likelihood of hijinks
- I was alone, emotions can tend to be runaway
- The experience was very, very brief
- I did nothing to verify, but rather let the experience inform my imagination and emotions
- Most telling of all, it expressed no interest in probing my anus

See? It did absolutely nothing that was unaccountable, to the senses or otherwise. That's not always the case for some in these type celestial engagements. That is, until you get dispassionate observers involved; chicanery is most often discovered at the root of these adventures.

My incident does not even qualify as a "Close Encounter" as there was no UFO visible. Under Bloecher's subtypes it does qualify as a category E in which an entity is observed but there is no evidence or sighting of a UFO. That is as far as the hypothetical nature of the experience can stretch. I had a "Type E" encounter.

Not my first, I assure you.

I have, and do, find it strange and interesting that seemingly normal people during the course of their daily lives are occasionally transformed by the experience of witnessing something unexplainable. I have read about the lives of reasonable people being completely upended by a single unexplainable experience. I usually assume boredom, some urge for their lives to be something other than mundane. I can understand and sympathize with that impulse.

But I am not one of those people. I have invited weirdness into my life from the beginning. Believing in love is as improbable as anything else, and filled with much wonder, magic, and all the speculation that any human can be expected to endure.

The same friend that denies all previous knowledge of my many alien-friends and confrontations used to be quite disturbed and excited by the idea of suspenseful films, and probably still is. She has an abiding fear of sharks, often when on land, miles from the nearest lake. Her fear is of the predatory and movable kind.

Now once, long ago... I wasn't sure if she had seen a certain film yet or not, or if she was merely frightened by the effectiveness of the advertising campaign, its presentation of itself as a documented fact that was only hereto coming to public light.

We were driving south through a darkly wooded part of Florida when she announced that she had to piss. She may have said "pee." We pulled off of the interstate but the only gas station there was abandoned, in unlit disrepair. La Commandanta' that she is, she just instructed me to stop the car. She exited on her passenger side, stepped backwards into darkness, dropped her pants and then herself. I could hear the tinkling sound of her squatted water-making. Looking off into the wooded darkness around us I decided to ask her, by chance, if she had seen the Blair Witch project yet. No sooner had I completed the sentence was she was back in the car demanding that I flee, immediately. It was not possible to escape the evil wood witch's clutches fast enough. Urine was apparently no match for the pitch-black pythoness.

We laughed about it, eventually. But there were many miles that we had to put between us and the sorceress that almost claimed her. 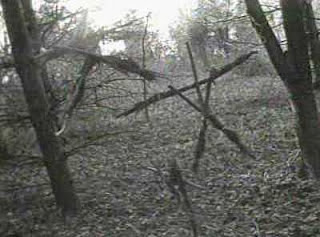