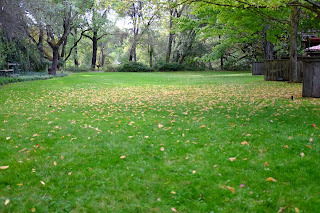 My head is pulled under the cover of childhood, reading forgotten comic books in the dark, a flashlight, a fortress of fabric in my pajamas, cotton heroes, sheets strung from wall to wall, wanting to make the smallest world more private, for reasons still not understood, giggling just in and out of innocence.

Wanting somebody to notice my fort. The imaginary fortress of this bunkered bedroom.

I remember the first $5 bill I ever had, creeping out of my Toughskins denim pocket. I tried to get people to notice it there. I did. If they would not, then showing them was my schtick. It was mine, though possessing little idea of what it meant, what it would.

It was a tender, of sorts. Currency, a wanted thing.

I show Rhys the falling leaves every chance we get, point to the trees bending in the wind; gazing upwards for seconds. Firsts.

The first outside sensation that he noticeably noticed was the marvel of the wind moving through the trees above. We held him, stomach upwards, cradled in our arms, on the back patio, dizzy with newness, dazed with wind. It is the reason that we moved here. Trees, without having to make a special trip to visit.

Now vainly, desperately, perhaps too early, I try to make the connections with him. I pick up a yellow leaf and draw his interest to it if I can, then up to the trees. A hopeful fool, pointing at the sky, murmuring of nature, seasons, temporary gods. Happy, for a time, with this absurdity of failure.

Wind moves above me now as I write this in bed. I can hear some of it, shifting - sounding like a beach town, a shore in the darkness, like a place that can not stop itself from giving up.

It reminds of a time, not so long ago.

In the 1960s, Sears' children's jeans were made of the same material as that of its competitors.  When market research showed that durability was the most important feature for parents buying children's jeans, then Sears' engineers headed into the laboratory to develop a stronger material than either the 50-50 blend of cotton and polyester or 100-percent composition of jeans most commonly found in stores at the time.

To demonstrate just how tough the new jeans were, Sears launched a famous "Tough Jeans Territory" ad campaign in 1974, in which Sears constructed a trampoline out of the Toughskin material.  Sears was so sure of the new line of pants that they were sold with a guarantee that children would grow out of their Toughskin jeans before the jeans wore out.