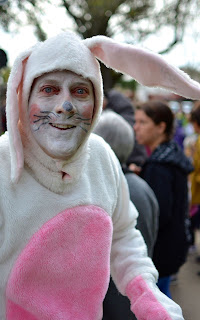 The wandering drunk seen above was twisted on gin and scaring all the kids in the park yesterday, demanding to have his picture taken, explaining that he 's currently out of work.

It was a little bit creepy for 10am.

We bounced from the first egg-hunt to another where everybody had the more civilized mimosas and the bunny was a little bit cuter. Though word did get to us that somebody, allegedly the bunny's mother, was gettin' heavy about when he was was gonna' get paid his $20.

It took some of the magic out of the day for the kids, I hope.

I kept warning them, Stay away from him, Don't get too close!, He might have rabies. To the mothers that began to express concern:  You know that Christ doesn't approve of intercourse outside of marriage, right?

Be very careful, I warned. Once they start burrowing they're just like dangerous rats, maybe worse... don't let the cute fur fool you, they are rodents through and through. Right now his fangs are retracted but if you make him angry he's likely to go into a rape-frenzy, possibly mistaking anybody here for a female bunny, or even a male, they don't care. Chocolate eggs are worse than crack to these fuckers. If he gets 'a hold of one of those he'll ravish anything he can grab onto, faster than you can blink. Strongest grip I've ever known, claws like sabers. The man-sized ones can leap 30 yards from a dead stop when they need to escape, even when they've got hold of a victim. There's a whole husk of 'em just up in the hills.

Once they had corralled me away from the kids I was chatting amicably with the other fathers surrounding me. It's a big problem this time of year, I swear. But don't worry, I'm packin'...licensed carrier (glancing from horizon to horizon). You guys hunters too? (trying to make eye contact, feeling sleepy).

It's the only time, to my memory, that mimosas have ever made me act that way. 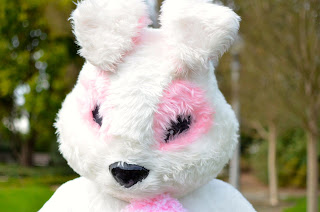