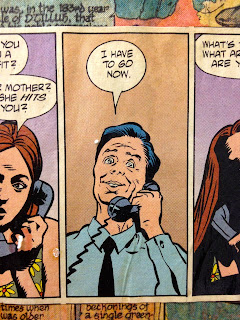 Well, I got what I wanted, I guess. Yesterday's post stirred some minor online controversy. I proved myself to not be adequately against rape, somehow. I knew that by discussing a hot button topic (the media) in a mildly ambiguous way it would bring out a few Inquisitionists. I have been feeling low and have had nothing to write about. Controversy stirs me.

I went so far yesterday as to use the word "victim" to describe the football player / rapists, pointing out that they are also victim to their own actions. I offered that a person can be a victim to their own self-abuse. A friend told me that I was minimizing the meaning of the word "victim" by doing so. I suppose in a postmodern sense, maybe. It is a component of deconstructionism, to render a text or term overly meaningful, or unknowable in a strict sense, by exploring all of the possible relational meanings.

Thankfully, my use of the word victim has not exhausted its significance and purpose.

We are all anti-rape. Nobody is pro-rape or filled with rape sympathy or rape apologies, except perhaps the rapists and their lawyers. But once you allow people to tell you what you can and can not consider, what is appropriate or inappropriate to discuss, or in which ways it may or may not be acceptable to do so, then you have knowingly allowed someone to censor you. It is a way of telling you that you are not qualified to consider or speak about a given subject. If it goes so far as to be gender based, which discussions of rape sometimes are, then you have also knowingly engaged in sexism, often as the victim of that sexism.

Try telling that to the rape-baiters.


A politically correct attitude in the media will do no more to help people understand rape motivations than enforced behavioral and conversation norms. Interestingly, the friend who told me that I was devaluing the meaning of the word "victim" is also very anti-political correctness, or has claimed to be so.

The two football players are rapists, convicted rapists. They will rightfully serve their juvenile prison time and then live the rest of their days as registered sex offenders. For some, this sentence is far too light, there is no punishment that would be too severe, that would satisfy the anger, pain and confusion at such an act. This is why we have a judicial system, so that the punishment for a crime does not rest with the victims of that crime.

If ever you are caught discussing the lives of the perpetrators, and the actions that may have led to their offense, then you will likewise be known as a friend to all rapists everywhere, so be warned.


Approximately 1 in 10 rape victims is a male, though 99% of the perpetrators of rape are male.

For some, the act of rape is simple and brutal, and they are against it. For others, it is a very complex dynamic, they are also against it. Rape seems to be many things to a few people and a few things to many people. We know that women are overwhelmingly the victims of it. This does not, by any logical or illogical extension, make all men responsible for rape, much less guilty of it. Be very attentive when listening to people discuss it. Once you allow vague accusations of complicity to silence you, well... we all know what that leads to.

A friend once confided in me that, in an angry moment, he had called his girlfriend a cunt. He was shamed and saddened by his actions, seeking some consolation or understanding. He went on to say that there is no term, anywhere, that is so awful that a woman can possibly call a man.