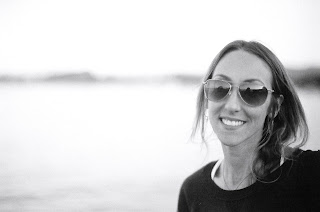 I got about 8 rolls of film back yesterday, mostly black and white. Shooting film is, of course, more expensive. Some of the money that was lost was done so through drinking while shooting. What otherwise might have been a great or even usable image is slightly out of focus, framed poorly, or there were simply recurring shots of something that isn't worth looking at. Still, there were some corkers in there, though fewer than there might have been otherwise.

What struck me the most in these images is how unpleasantly fat I've become. I don't often step to the other side of the lens, but there was a series of me holding Rhys. We had taken a little mini-vacation and it didn't seem fair to deny Rachel a picture or two as the sun was setting at the pier. But I was wrong. I should have said, "No, not a chance..." and then gotten some other, younger man to hold Rhys while I took pictures.

Wait, that can't be an adequate solution. It's only a matter of time in this scenario before this wandering model beach hobo is banging Rachel and has a great job in advertising. She never mentioned liking tattoos before.

I have to lose some weight, the only other option is to gain. I've been blossoming in slow motion for about 3 years now. It works out to approximately a pound each month. Even if I reverse this trend slowly it will take a very long time, too long.  I tend to function better in extremes. I can stick with extreme behavior longer. It gives me a new sense of identity and a different perspective from which to pretend. Somewhere just underneath the folds of my mind there lurks a light-hearted masochist that enjoys some healthy self-torture and ferocious bouts of masturbation.

If I start to sound like a speed-freak on this site it's because I've resorted to a combination cocktail of diet pills, strawberry Jolly Ranchers, and Adderall.

Christ, there are toys everywhere I try to step, the boy is screaming wildly while trying to climb into the fireplace, Rachel just dropped his oatmeal on the kitchen floor with a percussive explosion, the dog is eating the disaster with desperate but joyful abandon. Our house has lost its collective mind. It's a few naked midgets shy of being a boring Fellini film. I'm sitting here pretending to write in this chaos. The problem is that I should be thinner, dark haired, with sunglasses on, and dressed in an Italian suit, vaguely suspicious of this new skate-boarding, tattooed beach guy.