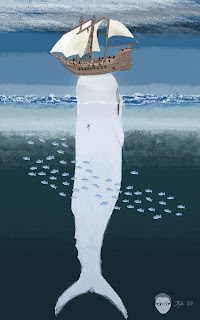 "... for there is no folly of the beast of the earth which is not infinitely outdone by the madness of men." - Herman Melville, Moby Dick

It was those filthy Russians that lost, or stole, my box of books. Okay, perhaps I'm being a touch nationalist, but they had the most disdainful attitude about moving our stuff. Those godless savages might have just tossed them in the garbage. Who can possibly know.

Let me go back... even though I'm certain everybody here is already sick of hearing about the lost box(es) of books:

When we moved from NYC to Sonoma we had a series of movers assist us. One set, the Russians, helped us get our stuff out of the 3rd floor Easy Village apartment and into pods, which were then put on a cargo train and sent across the country. Another set unloaded them from those pods into an apartment. A third set moved them from the apartment to where we live now.

Perhaps it's a cold war thing, but I believe it was the Russkies who lost, or more likely stole (though possibly just tossed out) the box or boxes of books... even though it makes much less sense to suspect them. They all arrived without a car and left likewise, mysteriously in plain view.

Their hatred for the written or spoken word insisted upon itself. The absence of all signs of language informed the moment, as it still hauntingly does.

"Russkies" is also a 1987 film starring Joaquin Phoenix, which doesn't help their case any either. Anybody that's ever seen the documentary "Dr. Strangelove" will understand the very real and genuine threat.

It might have been a glimpse of Moby Dick - that American classic that competes with some of the lesser Russian novels - that really riled them, sent them into a book burning frenzy.

Well, wait... let's just hold on here. There's no evidence yet that they burned the books. That was a bit harsh, admittedly.

It could have been Kant as well - their 20th century hatred of Germans, bubbling up through the patronymic, and finding form in one final moment of larceny. Perhaps it sent them on a national crime spree. That's what I would like to believe.

I can still see them all standing around once the pods were loaded, all shuffling of feet and unhappy grumbling in foreign languages, shifty-eyed, like they had done nothing at all wrong.

As with most heathens and addicts: the love of truth is the first to go.